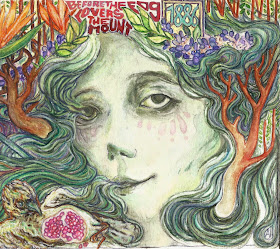 It was almost a year ago that hard psych group 1886 released their glorious self-titled EP which had us all dreaming of 60’s hazy tripped out summer days with longing smiles and not a care in the world. After much hard work, the guys from Barcelona have excelled once again with their debut full-length Before The Fog Covers The Mount, with its dreamy riffs, acid-dropping stoner tempos, and laid-back vocals, its a record to obsess over.
When music is so indebted to a time in history (1960-70s) it’s important that it’s done not as a tribute to a bygone era, but rather as if it was plucked directly from time itself, an undiscovered gem revealed 50 years later, and that is the key to 1886’s success; their passion, respect, and musicianship above all else takes centre stage, coursing through each track as if it was something born within each member. Opening with ‘Woodsman’ to soundtrack a summer’s drive along sun kissed sandy dunes, laid-back to the point of lying down onto the earth to stop from falling off, 1886 take you to another world, another time frame, to an almost different consciousness, the music becomes spell-binding. They manage the heavier riffs with as much aplomb too, as is evident in the stoner-esque ‘Witch Hunter’, the fuzz-licking ‘The Path Through the Green Forest’, and the heavy 70’s wah-wah tinged ‘The Seed Of Feed’.
1886 are craftsmen at what they do. Before The Fog Covers The Mount is a stunning collection of work that has propelled the 60’s into the modern century. It’s a record that should be on vinyl in every serious music lovers collection.