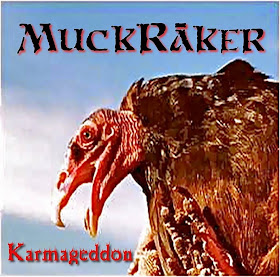 If you were to describe MuckRaker’s sound by saying that lead vocalist Will Price’s voice falls somewhere between Neil Fallon (Clutch) and Phil Anselmo (Pantera), while the music fits in between early Kyuss and Helmet, you would be forgiven for completely losing your shit and immediately seeking out a copy of Karmageddon, which sadly has no correlation to the banned 90’s computer game. Well, get ready to lose it.

The Atlanta based band’s second record opens with the title track and as many chunky riffs that you could fit into four minutes 25 seconds of joyously yelling “KARMAGEDDON”. It’s danceable “blue-collar” metal which has a political tinged undertone that isn’t immediately noticeable while you’re head banging around the room. It’s in fact the lyrics that make MuckRaker into a very powerful band, singing out against oppression and the downfall of the working man, that make you force yourself to stop and listen to the gentle aggression which becomes more indebted with each listen.

The heavy bass lines of Will Price, the marching chant of Batz Capo’s drums, and the gut punching riffs of guitarist Ray Mulligan, make MuckRaker one of the most danceable head-bangers to come out this year. It’s tight musicianship, with allegiances to traditional metal which doesn’t go off into self-indulgent tangents, but continues to carry along the core of the song until the end. It can leave you with a beaming grin. Grinning metal? Is that a thing?

If the powerful lyrics or the dancing wasn’t enough, every single song here requires you to join in the shouting of the chorus, whether it’s “ALL HAIL MARRYYYY!” (‘All Hail Mary’), “RED VULTUURRREEEE!” (‘Red Vulture’), or the record highlight of “RISE UP ALL YOU LOGGERHEADS, GO AND CRASH THE PARTAYYYY!” (‘Rise Of The Loggerheads’). If you wanted to really strip MuckRaker down to its barest of bones, you would have to say that they are full of just great songs, and that’s basically the essence of why we’re all here. Closing track ‘Too Much Metal For One Hand’ perfectly sums this up, a song about spending their lives listening to their favourite music, pissing off people, drinking, hitting the road, and loving every heartfelt moment of it.

Karmageddon is an exceptional record which should propel MuckRaker from their underground status, to serious contenders in the mainstream metal market. It’s an album to unite metal-heads, share a beer, and party all night to; and that is a beautiful thing.