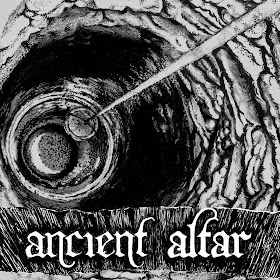 It's been ages since Windows Media Player got any use on a computer I've used, but technology's progressions have their failures. When forced to revisit 1991, I realize I'd forgotten about the trippy visualizations accompanying and syncing with every note. Then I can't help but think some forty-something is still sitting fully-robed in his hazed apartment flicking ash, blazing through a pirated Primus album, and gaping as the orbs and geometrics pixel the fuck out.

Well, the heshers are gonna dig this. Psychedelia abounds on Ancient Altar's four-track doom-crusher, twenty-seven self-titled minutes of unrefined sludgedelia teeming with despair and leaving your skin flayed. Bookended with eerie, sullen doom foundations and stuffed to the gullet with buoyant homages and burning sustain, this debut just might set fire to your panties.

The opening screeches of Tidal are jarred by dual vocals, combining Mike IX torment with cold, dark promise spewing from a mudhole. The back-and-forth is deep, low, squalid... y'know, all those descriptors you're gonna need if you try to explain the sound to someone who hasn't heard it. Guitars worm and weave between the rhythm's supports, but as elements tighten their bonds, they also fatten their breadbaskets and throw themselves into the pioneering sounds of forty years ago.

Ominous, isolated brooding on Ek Balam carves a path straight into a shadow-cruise of Kyuss's El Rodeo. We're involuntarily tugged west until the gurgle crawls from a pit of wet sand. There's no avoiding getting wrapped in humming, hanging tapestries beyond the ugliness. The sludge-doom despair, however, takes marquee billing with fully realized drawn-and-quartered anguish. But what the fuck? Swamp-assed stoner-sludge breaks the clouds on Feed, taking us in an entirely unexpected direction a la Grizzly in its head-swiveled trot. As sweet as it is sticky, the choppy militant movements enter Sabbath's Electric Funeral (y'know, that fucking awesomely frantic one-minute passage sandwiched between thick slabs) and listeners will be flat-out fucking stoked. Spit, sputter, and laugh with your greasy pals as the engine smolders roadside. It was worth it.

When it was assured "The oceans will consume," you were given no reason to doubt. You're still dizzy from the album's inspired midsection, but Pulled Out (grow up, dude) is a sunken-eyed tug soothing yesterday's open wounds. The promise of pendulumic doom is delivered upon with a steady descent into filth. Weary and weathered? Fuck, Ancient Altar offer one final acid heave, bubbling our skin as we gaze upward. By the time they toss us down a concrete staircase, we're half-snuffed anyway.

Don't worry about that exposed bone. And don't let knobby labels fool you. Doom out all you want, but Ancient Altar offer a vast expanse of soiled soundscapes. Crashing doom with swirling, torrid-clip chasers of stoner metal, complete with frayed ends and shifted gears. Strap on your ear goggles but for fuck's sake, turn off the tie-dye spiraled media player before you get bedspins. On this wholly flattening debut, we're enticed, we're drawn closer, and we're ultimately swallowed by what we're unable to predict.