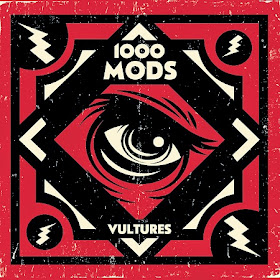 Those Greek psychedelic stoners 1000 Mods have returned from their great super van vacation to show that the promise from their debut lp was merely a harbinger of things to come. Any worries about a sophomore slump are quickly dispelled as soon as the needle hits the groove on the newly hatched Vultures, an album which oddly sounds as if it exists simultaneously in the late sixties and the early nineties.

A jangly guitar riff heralds the mod festivities on album opener "Claws". "This is what I wanna be, a pretty vulture in my nest" sings bassist Dani over an upbeat groove-o-rama that slowly dissolves into a molasses-like morass of feedback-driven fuzz. Speaking of vultures, you can almost hear them circling on the languid title track, a sun-baked desert rocker replete with various guitar strafes and grungy atmospherics from guitarists Giannis and Giorgos that is periodically punctuated by storm clouds of gnarly distortion and guitar licks that slice like talons ripping flesh.

1000 Mods specialize in rock that is slow and grungy and bloozy as evidenced on "She", a Bataan death march of a tune highlighted by a guitar solo that's as incisive as a switchblade to the gut. The vibe continues on "Low" which features a scratch-n-sniff riff over a slowly simmering rhythm before erupting in a vomit spew of psychedelic guitars. It all culminates in what is far and away the coolest track on the album, the instrumental closer "Reverb of the New World". An itchy riff scrapes across a hypnotic percolating bass line before drummer Labros propels the whole goddamn thing into a full throttle cosmic rocker that hyperdrives itself into spaced-out oblivion.