Heavy Planet Catches Up with The Midnight Ghost Train 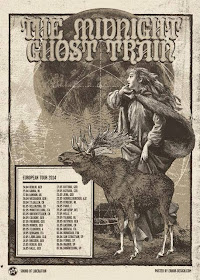 The Midnight Ghost Train are bringin' their heavy stoner blues to Europe this spring. This jaunt across the continent is nothing new for these notorious road dogs, and if you're over there I suggest you catch them if you can. We caught up with Steve from the band, and asked him about their new album, the follow up to the much beloved Buffalo, and what they will be playing on this tour. And it sounds like if you can point them in the direction of some chocolate covered bacon, they'd be much obliged.

Heavy Planet (HP)- Last I read you were undecided on a name for the new album, making any headway on that front?
Steve (S)- We think we got it figured out, but not 100% certain on it yet, so it is not yet ready to be unleashed. BUT all the photos for the record are done, and they turned out amazing, we defintley topped the last record photos with this new one.

HP- What can fans expect from this album? What will be the fuzz to blues ratio?
(S)- Ha fuzz to blues ratio I dig that. You know, there is actually no fuzz used at all in our band. People are always asking me what kind of fuzz I use, and I'm sorry to disappoint everyone but I don't. I just use a lot of bass in my amps EQ that gives it that more organic fuzzy feel. But anyways this new record is going to be awesome. We defintley have taken a lot more care in the writing process and in crafting the songs. More singing on this record, more structure, better put together songs, better everything. We really wanted to top BUFFALO with this new record, and I think we will have no problem doing that. Its just all around different and better than what we previously have done. Its fresh, very bluesy, and just a more solid rockin out album

HP- This will be the first recorded album with Mike on bass. How will his presence influence the album? (S)- Mike has added an insane amount to this band with his playing. Me and my drummer wrote all the bass parts on our previous records, and to tell you the truth we dont no shit about bass. So having Mike writing this whole record with us has added a completely new deminsion to the rhytham section. The bass lines are smooth as butter, and he is just all around such an awesome addition to this band which will come through very clearly in this upcoming album.
What blues tunes would you like to see get The Midnight Ghost Train Treatment? Any blues covers in your current set? ~None in our current set since we have been working so hard on getting these new songs exactly where we want them to be, so we have been pretty focused on the new record. But yea we have played around with some real cool covers. We do a pretty awesome really heavy version of a Ray Charles song "What I Say" and Muddy Waters "Manish Boy" that we will soon unleash.

HP- You guys are notorious road dogs. You go to chains or try the local flavors? Still into chocolate covered bacon? (S)- We prefer to hit the local spots on the road, we love finding local diners, and local favorite spots, but to tell you the truth for the most part we eat an enormous amount of Subway. But we're done eating at gas station Subways they always are terrible and a huge disappointment. The venues tend to always think crappy pizza is a good idea for us which gets pretty monotonous. Mhhm that chocolate bacon you got us was killer, unfourtunatley we havent come across that again yet.