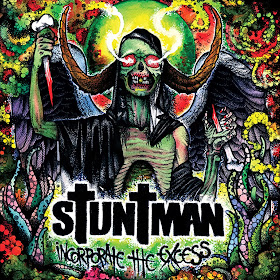 Aw, you wanted to take it easy this morning? Well, I'm about nine minutes sober and need to re-capture the buzz. Someone forgot to tell Jesus to turn down the heat last night and I'm pretty sure the teenagers up the street tore into the last of the beers in my garage. I needed a little wake-me-up that won't juice my paranoia. I'm not about to share coffee with the dusty old pricks at the diner, talkin' 'bout nothin' but gas prices and how "gott-damn" cold the weather's been.

Enter another French import from Solar Flare Records: Sète's Stuntman. On their third album, these tyrants spray steaming shit and cake a dulled landscape with seven tracks of jagged, jarring sludgecore noise that'll keep you outta your seat  like puddled piss. Incorporate The Excess is just under thirty minutes of blistering, spiteful torment, both inflicted and received. Consider it a "pay it forward" dynamic where the band wants listeners to experience a vicarious burn, stinging and soaking until skin drips from the bone.

The industrial crackle of Broken Mirrors Lacerate, unsettling and disorienting as it is, hardly preps us for the relentless auditory punishment of the remaining six tracks. The Patriot, The Elite, The Icon offers bulging neck-vein noise, pacing that blisters as it shreds, and loose chaos that somehow never succumbs to centrifugal non-promises. How elements manage to marry could only qualify as Satan's miracle. Slowing to a sludge trot only briefly, the split-lip fire of this slasher never wanders.

Releasing Bag Of Dicks as the disc's first streaming single likely provides listeners a fair glimpse of what to expect. More inflicted than delivered, the track is slow only in relative terms. Distant yelps perfectly complement gnarling, gnashing rhythmic lunges, so scornful and wholly defiant. This flagship track scorches despite its structural achievements and screeches despite its murky-motored pacing.

Finding groove appears to be the focus on Horn of Misery and Roll Your Skull, a slightly (only slightly) less vitriolic tandem of thrash-coated sludge-noise dysfunction. Horn falls as choppy and exhausting, sticking to your teeth like fresh tar peppered with sharp gravel. Roll has a more prominent groove, biting and putting a brake on the bark. Don't worry. Steady repetition leads toward a spiral of deliberate grief. You'll feel completely enveloped, but hardly comforted.

Clocking at two minutes, the album's award for most jagged and in-your-ear slab goes to the screaming Chaos Shepherd. You cannot sit down, you cannot stand still, and you absolutely cannot take the time to lick your fingers and savor this one. The rhythm never blinks, and the floored squelch is a symptom of atrophy. Hardly introductory, the song still serves as a contrasting lead-in to Scarecrow Warfare, an abrasive and patient true-sludge closer. Eating nearly nine minutes, this departure pits guitars against one another, lacing up and sparring between lumbering churns and piercing jabs to the eye. The weight of hatred has weakened your shoulders, while the descent of a drone blanket keeps your speakers rattling. We're steadily buried by layers of slow sludge, tracing thorny licks to map an escape route. But trust me, there's no way out of this awesome stickiness.

Stuntman inject a heave into their breed of sludge, tossing noisy, hardcore grenades with little regard for what ensues. If broken glass is bad for your teeth, then Stuntman are just as bad for your future. Punishment gluttons, line up. These seven sins don't even bother with a knock on the door. They know you're home and they know you're due for a slick beating. When sludge is this angry, you know you've fucked up. After these 27 minutes, your only choice is to play dead.