Sunday Sludge: Indian - "From All Purity" 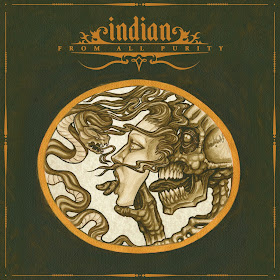 Indian have spent a decade slowly snuffing out listeners utilizing an incendiary, spiteful cocktail of misanthropic sludge, primitive doom, and an agonizing blackness that'll sink your hope-filled chest. From All Purity descends into depravity immediately and completely, six torturous tracks clouded with hatred and hardly caring to wonder if you're gonna be okay. 2011's Guiltless etched Indian into the ranks of the doom elite. January's From All Purity demonstrates their commitment to the cause.

The aptly-titled Rape is slow-motion sonic assault, splicing dull ache with sharp pain. But from the onset, the abrasions are what stand out. Screeching licks and organ-shredding vocals arrive with blatant malice, the rhythmic patience of slow dirge acting as a structural bonus. Timing and execution is a clinic here, precise and testifying to a band knowing exactly where to funnel their punishment. Under tapestries of shrill noise and weathered doom, Indian make no haste violating your frame at every level.

As you realize you won't be clubbed out of your misery, the shrouded chops of The Impetus Bleeds are just another extension of the distant, cavernous anguish. With the pulse of a murder factory, there's no catharsis accompanying this repetition. Indian slug at consciousness without allowing for numbness, just drawn-and-quartered brutality. Eternally evident is the stomp of sludge, punctuated by the piercing noise. As the album hits its stagger, Directional steadily sprays violent dust, buzzing with the descent of doom and drawn-out churns. A grindhouse aura of permeated spite greets slow-burning rhythms, guiding us as marked sheep.

Rhetoric of No is relatively amped, splitting sludge with a deceptive vocal vulnerability among sludge-doom riff mangling. Guitar embers brighten, revealing a heaving presence, squealing ans scratching at hope. The track is as untameable as it is undeniable, and we're being slowly buried. As tailing technology drains all sense on Clarify, an unsettling intermission breathes only shrill disturbances, scoffing at all things synthetic.

As this crusher sways to a close, gazing through dead, lifeless eyes, the metered and calculated devastation stays set on its target. A strange solemnity finally punches through after poking holes throughout the album. Plates shift and Indian's swarming sound envelopes all. Guitars buzz like hornets and double-kicks wrangle our ankles toward a death-drubbing. Atop your dying breath rests a cloud of despair, mocking your uncertainty.

If you've made it this far and struggled through all these descriptors, maybe you've found the digressions far more painful than you'll find Indian's breed of doom-drenched noise. The jagged glass that's been stomped into your cavities is just a whisper of what Indian offer with From All Purity. This is a band wringing their dirty hands and tossing bricks, but they're hardly aimless. These six tracks hit the spite-nail straight on the head, driven directly into your senses. I didn't think anyone could improve upon Guiltless. Somehow, these dudes have even less remorse than they did years three years ago.