Ladies and gentlemen, I introduce to you what I believe to be some of the absolute best stoner rock or retro/blues rock albums recently released into the cold, dark world of underground metal, where the light from without remains dim but the fire from within is fraught with explosive, sapid, deep, low, and fuzzy abundance. These are the types of albums we crave, where the music is timeless and rich, stuffed full of soul stirring guitar, and amaranthine melodies, often driven relentlessly forward by genetically superior vocals and athletic rhythms. I always envision bonfires in the darkest night with inebriated, naked souls unabashedly cavorting in unison around the conflagration to the intrinsic, soul stirring rhythms of an amplified universe. To me, this music is universal, eternal, linking us all in an elemental, tribal connection of fury, fuzz, and fun. Bring your matches.
~~~~~~~~~~~~~~~~~~~~~~~~~~~~~~~~~~~~~~~~~~~ 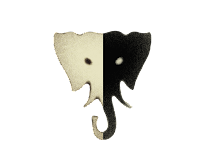 This is not the first twosome reviewed this year on Heavy Planet that consists solely of a drummer and bassist, and with no standard six string in the mix. Just like the previously reviewed Bedroom Rehab Corporation, today's subject, Exporting White Elephants of Santiago, Chile, take their 2 rhythm instruments plus vocals and deliver some of the finest riff infused butt fuzz rock you are likely to hear this side of North American high desert country. T. Sanchez and T. Frothingham play their melodic brand of stoner rock with immense intensity and consummate ability on their debut album, "Organic Raw", in what we can only hope is the first of many to come. Bluesy and beefy, deep and dirty, the melodies are electric, Frothingham's vocals are ragged and rich, the teeth rattling bass riffs that power this mega meaty album are timeless, and the ferocious drumwork drives it all with grace and heart.

Favourite songs - The uptempo and breathless "Koukeing", the haunting, stirring "Hey Papo", the atmospheric exhilaration of "Nasty Lips", and the riff laden closer . . . ah . . . damn . . . I can't recall it's title. 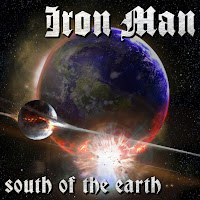 IRON MAN - SOUTH OF THE EARTH

Despite frequent and numerous lineup changes throughout Iron Man's decades long history of rocking the faces of the world the current lineup for "South of the Earth" has managed to deliver a masterstroke of metal brilliance and flawless teamwork as if they had all been there from the jump. The one constant membership for this Baltimore band has been guitarist Alfred Morris III whose metal maturity and insight serve the album perfectly by delivering intense and inventive riffs throughout. The flavor of this album is old recipe rock with a dash of low tuned stoner sensibilities sprinkled throughout. Matching Morris' brilliant guitar work is the hurricane force vocals of Screaming Mad Dee, while the rhythm section of Louis Strachan on bass and Jason 'Mot' Waldmann are nothing short of exceptional.

Favorite songs are "Hail to the Haze" and "The Worst and Longest Day".

Email newsletters for bands at ReverbNation.com 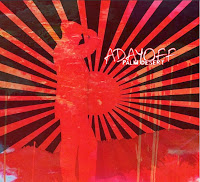 The Polish band Palm Desert makes the Heavy Planet spotlight for the second time this year with the EP release of "Adayoff", following closely on the heels of  full LP "Rotten Village Sessions", which was a highly rated stoner rock tour de force. This foursome of Kamil Ziółkowski-drums, Jan Rutka-bass, Piotr Łacny-guitar, and Wojciech Gałuszka-vocals suffer no drop off in quality as they deliver 6 beautifully crafted and executed songs that fit dead center into the flagship stoner rock genre with subterranean riffs rumbling mightily throughout capably crafted, memorable melodies. Perhaps the most amazing thing here is that the band is working on another full length release but have diverted their efforts to this small collection for the time being. Without knowing the details of what motivates these guys, they are not only prolific but incredible artists who brilliant create and execute, so it seems apparent they are as driven as they are gifted and that is nothing but a boon to lovers of the fuzz for what appears to be years to come. 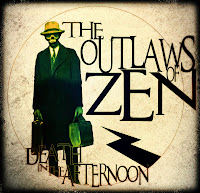 THE OUTLAWS OF ZEN - "DEATH IN THE AFTERNOON"

This foursome from Michigan deliver fierce, fun retro rock, or as they put it, Retro.Riff.Rock, which is dead on for the style of music they have conjured up for our listening enjoyment. The energy and power they display is executed against clever melodies that are timeless and memorable, and they are just getting started as "Death in the Afternoon" is their second EP, following on last year's "Don't Bother Getting Up, We'll Let Ourselves In". Joe Gibson provides gifted vocals, Travis Evans lays down base fire on drums and keyboards, Tommy Koppman is monstrous on bass, and Korey G slashes, rips, and burns with immense riffage on guitar. 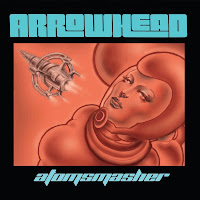 Dateline Sydney, Australia where the experienced stoner rock threesome Arrowhead deliver a high caliber release with "Atomsmasher". Pure stoner rock is the name of the game on their first full length release since forming in 2008. All musical elements are of the finest mettle, from the riff laden firebrand guitars of Brett Pearl, the monstrous, pummeling rhythms of drummer Matt Cramp, the deep, driven basswork of Dave Lopez, and back again to the pitch perfect vocals of guitarist Pearl, all wrapped around adventurous, well crafted melodies that propel this album to superstar status and lands it on the short list for top album of the year.

Favorite songs - All of them. I'm not kidding. This is a great album.