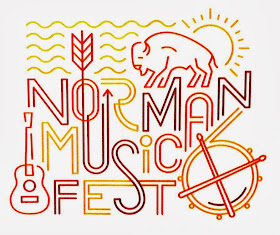 This coming April in downtown Norman, Oklahoma, just 20 miles south of Oklahoma City, will be held the 7th Annual Norman Music Festival. Over the course of the past 6 years in which the festival has been held it has grown in stature by leaps and bounds until now it hosts over 300 bands, 50,000 spectators, and generates millions of dollars in revenue. It rivals, but perhaps doesn't yet match, SXSW in Austin. It is on a steady growth track, however, and no festival is safe! It is a weekend filled with fun and music and is a great time for all involved. I, though, would offer up the prospect that the fuzzier contingent of rock music has yet to be sufficiently represented at this fine event. I would dearly love to change that eventuality, so I am posting the open call information published by the festival promoters in hopes that many of the fine bands and types of bands covered by Heavy Planet will apply to attend this coming April of 2014 and show the Wild West what loud, low, furious, and fuzzy rock is all about.

Please click on this link - NMF 7, APRIL 2014 - to apply to attend and give the people of the Southwest an experience they won't soon forget.