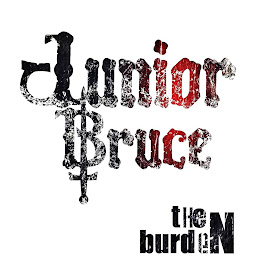 Read the label. Check the locks. Look both ways. Plan ahead. Watch your step. Wipe your feet. Wash your hands. Mind your manners. Designate a driver. Wear a condom. Say please. Say thank you. Buckle up. Eat not to dullness. Drink not to elevation. Call your grandmother. Wipe twice. Nah, three times. Elbows off the table. Keep up. Speak up. Wise up. And hey, don't forget to read your email.

Shit, I haven't followed any of these rules lately. The last of which kept me from enjoying two of the heaviest pant-loads of stoner-sludge groove released over the summer. In my defense, Junior Bruce decided to issue The Burden on my son's fourth birthday, meaning my junior trumped theirs and everyone else's. Let's hug and move on to discuss this EP, which is a huge step forward despite eclipsing merely eleven minutes. And Toby's as busy as anyone these days, so I'm swiping his "In Case You Missed It" thunderclap on this release.

The Burden offers JB's first new sounds since 2012's The Headless King, an excellent exercise in captivating stoner-fuzz sludge that was shrouded by the distraction of drummer Brett Tanner's battle with cancer. Following his unfortunate passing, it's a wonder the band found the sack to continue, let alone expand their catalog with an EP that barters steady repetition for dense doom atmospheres. The stoner-sludge pulse remains, but these two tracks breathe a little deeper. Junior Bruce inhale without a wince and exhale without a cough.

The opening title track certainly bears the dense fuzz markings of a band clouded by slow strolls with memories, half-smiling atop cracking twigs and falling leaves. The doom cadence lurches face-forward into hoofed and pounding rhythms. Building on the broken backs of chainsaw riffs, the mood swirls and storms via ash, winded blasts, and no shortage of muddled groove. Rhythmic shifts cleanse the palate, at times sobbing and at others flat-out ripping. The anguish gives way to anger. The anger gives way to control. A natural process, I suppose. Whatever the catalyst, these dudes get it right.

Less stirring and more continual are the true highlands doom-heaves of The Ocean's Daughter. Scott Angelacos snarls atop stoner riff-ribbons, while scattered choral chants offer brief respite. Jeff McAlear's snap & lick drumwork is another highlight, guiding rhythms that shift less and instead extract painful introspection. You'll find an ambitious mountaintop solo, piercing a steady tempo that never quickens or out-steps itself. Without the tremors, the song grows moodier and heavier at each passage. If it's too slow, you're simply too young.

There's more to come from Junior Bruce. My thought on EPs is that they serve as precursors, sneak-peeks into what bands have in their queues. The Burden provides glory-hole perspective on a sound that's evolving with not only every release, but every track. Don't elicit greatness from two songs, but don't deny it either. America's dick has evolved into a hotbed of stoner-sludge-doom spirits, but the trip between Orlando and Miami must be a thick one. Oppressive and sweltering, Junior Bruce carve their own brand of viscid metal. Your grandma understands Florida. So should you. 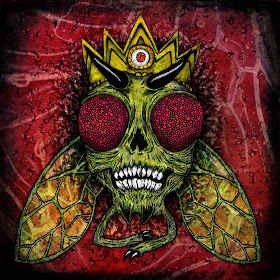