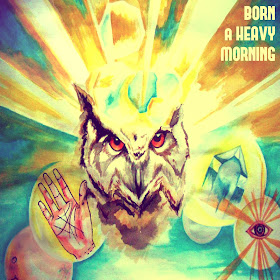 Ice Dragon are not just any old psyche/doom/stoner/heavy rock band. Not only are they one of the most prolific I've ever come across with 12 releases since 2010, and that's not including their releases under their alter egos Tentacle, The Mangled Dead and Qosmic Qey amongst others; they are also consistently fucking great and they just keep getting better.

Ice Dragon makes recordings in a basement near Boston, Massachusetts. Works include many albums, singles, and EPs, as well as numerous releases under various other names. New music is issued frequently and spontaneously.

This 12th release under their Ice Dragon moniker lives up to its title of "Born a Heavy Morning" and is some of the most experimental work that I've heard yet from them which makes this album a real mixed bag of sounds. Yes there are heavy riff work-outs with the inimitable Ice Dragon plodding stomps, maudlin words and deep blues guitar lickery but they are few on this album. What stands out for me most of all are the short skits between the main songs some of which serve as nods to my least favorite time of the day; morning.

The track titles on this album are sheer genius so chew on these for a moment if you will: "In Which a Man Rises, Washes and Eats Before Work" or "In Which a Man Daydreams About a Girl From His Youth" and "(I will) Watch My Hair Grow."

For the most part the main songs on this album are slow introspective numbers and sometimes they are quite twee, gentle even, much as an early morning in spring with a newly risen sun shining it's lovely rays through the gap in my curtains and informing me it's time to get the hell up out of my bed and start my day. I hit play on my player and this album fits perfectly with my first coffee and toke of the day; this is morning psyche-doom to go with your shit, shower, shave and cereal and it slays the sleepy eyes and shakes you awake enough to face the day ahead. I'd like call it "musical breakfast" so I will, even if it doesn't quite do justice to the fine work these Ice Dragon gentleman have done for us.

One wonders what else Ice Dragon have up their sleeves for their future releases but with the consistently great music spewing forth from these 4 Ice Dragons that dwell within a basement, you just know they are going to hit all the right riffs, all the right notes and all the right skins.

Thank you Ice Dragon for being you.

"Born a Heavy Morning" is out now as a name your own price download from their bandcamp where you can also pre-order the album on CD.