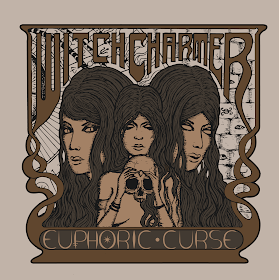 Witch Charmer are a female fronted stoner metal/trad doom pentangle from sunny Sunderland, UK who have recently released their debut EP "Euphoric Curse" which conjures up 4 incantations of impressively evoked stoner metal pulled right from the doom rock grimoire of riff magick. Witch Charmer could be the UK's equivalent to Blood Ceremony, minus the organs and flutes; but they have their own very British aura which had me thinking about old Hammer horror movies and such like from the late 60's and 70's. Movies like the classic British folk or "pagan" horror The Blood on Satan's Claw, which this EP would make the perfect soundtrack to. In fact I listened to the EP while watching clips from the movie on Youtube and it fitted perfectly. In my admittedly slightly inebriated and prone to flights of fancy mind it did anyway.

The EP opener of "Worlds Burning (Inside the Fire)" brings thudding drums and a throbbing bass that leads to revolving heavy metal guitar chugs and the crystalline vocals of Witch Charmer's priestess backed with the rough roars and growls from an accompanying man-dude which blend and wrap together so well that the contrast is strangely crushing and at the same time very soothing to the ears. From the chunky metal chugs and bendy stoner riffs the song effortlessly transitions into some old timey doom with the spine tingling vocals of the priestess luring you into the final section and its satisfying and fist raising stoner rock work out.

"Born a Slave" follows with a baggy fuzzed out riff and divinely sung words with bluesy Wah licks that drop down into some great stoner rock riffwork and then, building from a snare roll the song launches into a storming ocean of righteous and determined heavy metal with the gruff and dirty vocals of the male singer taking the forefront. The pace then slows to a sleazy guitar and Wah slaying and crushing drums taking this track into a full on filth bag of feedback and collapsing crushing drum hits leaving only the soft plucks of a bass to see this track out.

"Waiting for a Call" wastes no time in launching right into down tuned heavy and crunchy stoner riffs with the clean voice of the lead singer adding a pleasing contrast to the fuzzy dirt of the heavy guitars and drums with the gruff voice of the male singer adding an extra weight of stoner metal to the track later on. The song ends abruptly in a tumble of drums and a "thank you and good night" conclusion but fear not as Witch Charmer have one more heavy metal incantation for us.

With the low down and fuzzy bass opening of "Sleeping Dystopia", an explosion of heavy stoner rock riffs and driving drums has the 2 singers take it in turns to express a discontent that the "fucking system's bent". I like the cut of their jib as their sentiments are sound and undeniable so listen intently to the lyrics as there is truth and wisdom contained within. The track evolves from big stoner metal riff worship to soul crushing doom with bluesy licks and then to positive and spirit raising heavy metal that shines a ray of hope on what looks on the surface to be a hopeless situation.

I thoroughly enjoyed this debut EP from Witch Charmer, especially while watching clips on Youtube of old British horror movies and listening carefully to the interesting and wonderfully sung lyrics of the lead singer. With the contrast of rough male vocals, the solid stoner metal riffwork, the crushing retro doom vibes and euphoric moments of heavy metal; Witch Charmer are a band that deserve to be noticed by everyone who loves heavy music.