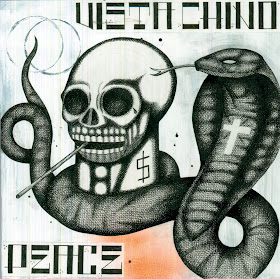 ~~~~~~~~~~~~~~~~~~~~~~~~~~~~~~~~~~~~~~~~~~~
It's been a long time coming, with many trials and tribulations that would have completely obliterated the resolve of lesser artists, but the incredible Brant Bjork and John Garcia have persevered, resurfacing as Vista Chino, and releasing their first collection of new songs under that new flagship. What's the result? From the dust and ashes of time and emotion it all boils down to that simple inquiry . . . what is the result . . . what kind of music do two members of the most totemic stoner band this side of Black Sabbath now make? No one, absolutely no one on the face of Planet Earth, except for possibly 2 lone souls, could have thought this music would be anything approaching the significance of their earlier incarnation . . . too much time, the loss of what many thought to be the most significant member as well as the eventual loss of yet another founder (but not before he contributes his sensational bass maneuvers on the majority of the songs), too much time touring almost as a tribute band to themselves, rehashing the sounds and chasing the glory of nearly two decades past . . . how on Earth could this music be anything other than a charming attempt at relevance? But the toughness, tenacity, and fortitude of those two artists, combined with consummate song writing ability, hold forth with the release of "Peace", the inaugural album of Vista Chino, delivering intensely deep, artistically applicable music that reflects all the joy, pride, and ability of supremely gifted artists who have refused to fade into the background of obscurity.

The years typically are not kind to the human voicebox, especially when it comes to the vocal chords of rockers, but that singular sound that is John Garcia is loud, clear, and prominent on "Peace". His vocal sound can be considered as one of a kind, one of the best in rock's history . . . yes, all of rock, not just stoner rock or high desert rock.

The years, too, can tend to drain the song writing heart of even the most gifted of creators. That heart is an incredible engine for artistic production, especially the heart of a gifted writer, but often even the most skilled craftsmen exhaust the well after years of mining its precious load. So, add to the incredible accomplishments on "Peace" that of songcraft . There may not quite be a "Green Machine" or "Odyssey" in here but the songs are expertly, cleverly, and imaginatively written with a deft and deep touch on instrumentation and a gifted understanding of timing and structure. These songs are thoroughly enjoyable, as you would imagine them to be coming from Bjork and Garcia.

One more brilliant stroke of note, for me, is the inspired addition of Bruno Fevery as lead guitar. Bruno was not a widely known player in the underground world of stoner/doom rock, not to the level the 5 main members of Kyuss have achieved, of course, or not even as a member of a known band. He was not yet established in the upper echelons of stoner rock, but Brant and John must have noticed something special with his playing abilities beyond his experience playing Kyuss cover songs, and this specialness comes through in a big way on "Peace" with deft and inspired playing throughout the album, playing in such a way as to never miss the founding lead of Kyuss, but to instead thoroughly enjoy the founding lead of Vista Chino. I can't know how much influence he may have had on song construction, but I doubt it was zero input, not with ability such as he demonstrates on this album.

The album opens with a short trippy instrumental introduction titled "Good Morning Wasteland" that gives almost no indication of what's to follow. It only takes a minute before thrusters kick in full force with "Dargona Dragona", opening with low tuned and tightly wound riffs that immediately evoke the signature sound expected of Bjork and Garcia while being neither a caricature of Kyuss' music nor a strained attempt at perfect replication . With Fevery providing inspired and deft riffage, Bjork filling in with artistic aplomb on the drums, and Garcia bringing that timeless vocal sound into play Vista Chino immediately set the stage for significant, new, and familiar high desert melody.

"Sweet Remain" is an exceptional song in that it provides a clear cut rendition of Bjork's song-writing ability, which is always clean, always engaging, always a consummate experience. Garcia stretches his vocal acumen here, singing in a range that is above his typical comfort zone. Deep rumbling riffs provide the backdrop throughout the song while Fevery's spotlight moments are intensely engaging.

"As You Wish" begins to show expressions not rendered before by these artists, and is expertly ministered in construction and execution.

Track 5 is a two for one offering and is the album's best piece of music. There is much to enjoy and savor on "Planets 1&2" not the least of which is Bjork providing vocals for the first section while Garcia chimes in beautifully on the second. "Planet 1" is tight and energetic in tempo with fuzz flying in all directions as it soars through whatever solar system these planets belong. A more deliberate and heavy delivery brings us into "Planet 2" accentuated by Fevery's fiery deftness on solo licks and Garcia's deeply emotional vocal delivery.

"Adara" is reminiscent of the desert from which the older members hail, just a funky, laid back outburst of intense control, flowing with the wind and riff driven sand, beautiful in its brightness and severity.

"Mas Vino" is another short instrumental, this one guitarcentric and sublime.

"Dark and Lovely" is funky and fun. Fevery's solo licks are exquisite on top of the rhythm deliveries, as are Garcia's vocal treatments.

By the time you get to "Barcelonian"  you begin to recognize the sound of Vista Chino as one of intense enjoyment, with songs of consummate skill and alluring musical qualities. The intensity of low tuned guitars and deep driving base perfectly complement deft and nimble drumwork and the singular sound of the frontman's vocals.

The closer, "Acidize . . . The Gambling Moose", is an incredible odyssey that kicks off with an impeccably fuzzy solo leading into another tight and beautifully constructed up tempo rendition of stamina and drive that further carries the listener along on a hypnotic carpet of deep blended wool.

"Peace", if never known for anything of past conglomerations and genre defining rock sounds would remain a significant event in the timeline of stoner rock music. It delivers magnificently on all levels and never needs comparison with anything else on any grounds other than how it stands on its own in rock zxquality and excitement, which I would be willing to bet was the most significant factor driving these gifted rockers to this long overdue point in their careers.