In Case You Missed It: Silver Devil - Self-Titled 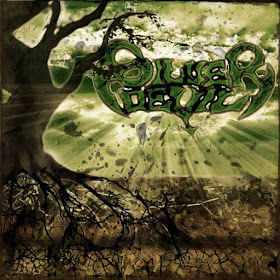 Two years ago I named Äppelträdet by Sweden’s Skraeckoedlan as my top album of 2011.  It goes without saying that I became a huge fan of the band after hearing that record, so when I read last month that they’d be taking their fellow Swedes, Silver Devil out on tour with them, it was a no brainer for me to check out this opening act for myself.  Of course, given that the Atlantic Ocean presents a bit of an obstacle in terms of me actually attending this tour in person, I did the next best thing and went in search of Silver Devil on the interwebs.  To my surprise I discovered that we had already featured these guys as a "New Band To Burn One To" way back in February 2010, but then somehow overlooked their beast of a debut album, which was released a year later in May 2011.  Given that I couldn’t exactly just show up early to see Silver Devil as they opened for Skraeckoedlan, I figured I could at least spread the word and shed some light on their phenomenal, yet unsung debut record to all of you good people.  So in case you missed it like I did, I’d like to introduce you to Silver Devil.

Now the first thing you’ll notice is the dual guitar attack of Jonas Hamqvist and Otto Molin as the two combine punishing riffs with melodic hooks and solos that add more depth to these songs than you’re likely to hear from your typical stoner rock band.  And that’s a common thread throughout the album; making this debut as memorable as it is heavy by ensuring that each song finds a place to bury itself inside your head.  “Cactus Kicker” (best song title ever) is a perfect example of this, with its rumbling riffs accompanied by slick fretwork that slices right through the wall of fuzz.  Throw in the ultra-chill, slacker style vocals of Anders Löfstrand, the low end rumble from bassist Erik Bergkvist and the thunderous beats and consistent crash from drummer Marcus Ström and you’ve got yourself the musical equivalent of a V8 saddled hot rod burning down the highway.  The entire album is a highlight, but if you dig recommendations, take “7.8” for a spin and then check out “In Space.”  Man, you couldn't find more fuzz if you shoved your head up the ass of a stuffed bear named Fu Manchu.  But just as a reminder, this one’s already two years old, so don’t waste any more time.  Put the top down, roll up your sleeves and take a ride with Silver Devil…this shit is cherry.