This week my state suffered a major catastrophe brought on by something as innocuous and terrible as weather. It is sheer coincidence that for this week I had queued up for review the tremendous "Skeleton Dixie" by Scattered Hamlet . . . scattered hamlets . . . de rigueur for central Oklahoma for two days straight this past week. As I'm listening through this ass kicking album, as well as the equally awesome "The Depths" from The Blackwater Fever throughout the week in attempts to not only prepare for the review but to escape from the horrors of the Fujita Scale, even if only for the drive to work and back each day, I was struck by some of the lyrics in Scattered Hamlet's stirring "Warning":

We all make our choice
And choose our destiny.
Through all the pain and loss
Nothin's clear to me

Too young to die,
Heed my warning.

Just snatches of a lyric embedded within gargantuan music and a personality as big and powerful as a wall cloud, but it jumped out at me. Those lyrics and their accompanying music were a powerful analgesic against heartbreak. The troubling thing, though, is the effect of the storm on me is minimal because it missed my neighborhood on both days, even if just barely. The poor folks in the paths on Sunday and Monday need strong analgesics of every sort, now and perhaps for evermore. I can only hope some of those folks will find such in the power of all the great music found on Heavy Planet. I know I do.
~~~~~~~~~~~~~~~~~~~~~~~~~~~~~~~~~~~~~~~~~~~ 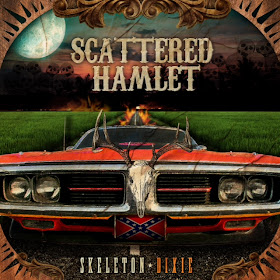 Hailing from all over the damn place and calling no place home, Scattered Hamlet are a big personality, but they don't use that mammoth projection as a cover up for little to no talent as some loud, obnoxious bands do because it could be easily argued the music behind Scattered Hamlet's persona is larger by a magnitude of significant proportions. Meaning the music is huge and hairy, filled with the dust and grit of dried wheat stacks searing in a white hot southern sun as guitars grind and clang with force and daft deft skill, bass rumbles and roars like pitted, bygone bulldozers plowing cracked ruts out of red clay, an uncanny cadence of drumbeats echoing off cliffs of sun scorched strata, and the crackle and spark of distorted amplification carrying the power and presence of overriding, dominating vocals.

"Skeleton Dixie" consists of eleven songs crafted with raunchy attitude, a fervent disregard for convention, and a freight car full of retrospect and reflection on legends past and dear. Every big southern rock band you've ever heard has made a small space in the swirling vortex of Scattered Hamlet's pulse pounding melodies.

This band nails all the major points of great rock and roll. Guitars are, simply put, always engaging with riff and solo alike. Always. Bass and drums step out of bounds on several occasions, adding spice and flavor to an already gritty stew of metal shavings and discarded weldings. Vocals are powerful and fierce, able and adept in fulfilling requirements on all songs. And through it all, melodies engage and entwine lickety split, delivering memorable riffs and hooks not soon discarded.

As with the opening monster, "Shelter", where a primal, engaging rhythm of power and heat accompanies the initial experience of Joad's prodigious personna, "Falling Off the Wagon" is immense in every facet of the song, expansive in scope, gargantuan in delivery, a momentous melody of lasting forcefullness.

The winning title on the album is "Powder Kegs and Gasoline" and the accompanying music does not disappoint. This is raunch in the mud and roll in the grime fun. The closer, which happens to be the title track,  is a clever and apt choice to end a perfectly blissful listening experience with a peal and roar tempered by athletic deftness in rapid fire rifling riffs of deep, low thumping distortion.

This album is fun, plain and simple, delivering brightness and cheer through power, grace, and fury, easily lifting spirits no matter how low and black they may be.


In 2012 Scattered Hamlet attended the humongous rock n roll show held in Pryor, Oklahoma. Today they are my signature band for the events of May 19th & 20th, 2013 in Edmond, Shawnee, and Moore, Oklahoma, bringing a fury and power of their own, but not tearing down, instead building up as do all the great stoner, retro, psychedelic, doom, and sludge bands offered by Heavy Planet on a daily basis. Hail! Hail! 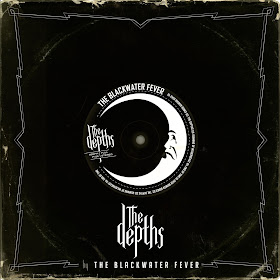 THE BLACKWATER FEVER - "THE DEPTHS"

Endearing, searing, soaring, roaring melodies of melancholic pain and astonishing depth have been indelibly etched onto the amalgamation of blues rock songs captured in atmospheric majesty on The Blackwater Fever's monolithic "The Depths".

This three piece band from Brisbane, Australia recorded and produced this album entirely on their own in their home studio, and while it's their third album, it's the first self produced release. There is certainly no signs of home grown amateurism on the sounds captured within this 14 song bundle of piercing energy and soul stabbing clarity.

The uniqueness of each of the fourteen tracks is matched in entirety by the signature sound of the band on each song. That is a fait accompli of enormous proportions, stamping both uniqueness and signature on a baker's dozen plus one.

Deep abiding fuzz is meted out in massive portions on "Can't Help Yourself", carried along on a bed of raspy, rusty riffs like a nailbed in a hailstorm, inexorably fascinating, haunting, long carved into consciousness and memory.

Hicks' is gifted in both vocal and riff, while Walter delivers power and guile with his stickwork, and Walters is inexorably reliable in volume and depth with bass that does more than simply blend into the woodwork.

A great example of uniqueness and signature is "Don't Fuck With Joe", a song that at first listen seems like a bit of a colloquial anomaly with its Americana stamp, but familiarity breeds recognition and admiration on a melody that takes you down a back alley of sleazy pleasure that is still carpeted in deep pile fuzz and filled with blues rock components on a journey that hearkens intrinsically to Jim Croce with spiking voltage and well developed sinew.

"Now She's Gone" is a blistering, haunting, scorching horse race through deep dark mud on a background of bright, searing sunlight, immensely enjoyable and deeply memorable, while "End of Time" provides a similar, but unique experience of stirring, soaring melodies and hooks.

"Won't Cry Over You" is thick with distortion, low tuned, metronomic and masterful, split by white heat solos bridging the distance between mountains of gargantuan gravel. "Running of the Wildebeest" is an instrumental tour de force, showcasing the skillsets of each of the three band members without attention grabbing vocals in distraction. It's brutal and majestic, complex and clear, offering up an accessible platform on which to ride strands of vibration through clear and jagged streams of blues rock.

This album is superb in every way, deeply satisfying, and deserving of immediate attention, and at the end of the year when accolades are meted, as well as forevermore in a fine, riff fueled buzz bomb of extraordinarily beefy blues tunes.