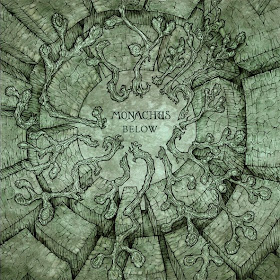 "MONACHUS. capturing an organic timbre that invokes images of these swedes toiling over beloved instruments... Deep down... BELOW."

Formally of Icos, the 3 Swedes that make up Monachus have been true stalwarts of the Euro Doom scene since 2001. Every release by these guys, either as Icos or as Monachus has been some of the best Sludge and Doom with roots firmly laid in Hardcore and Crust, that I have heard yet. Coming from the same Doom-Crust directions as Neurosis, Amenra and Fall of Efrafa, their Sludge is of a melancholy type played with honor and from passionate hearts and with their latest, "Below" released back in March on Alerta Antifascista Records, Monachus have outdone themselves.

Slothenly dirge-drenched riffs, introspective twangs and droning atmospherics, interspersed with ultra-bluesy word delivery and earth shattering drum work, as can be heard in track 2, "Curse", typify Monachus' sound. Make no mistake, Monachus are heavy but they do not fall into the trap of playing heavy for heavy's sake and leaving out excellent song writing. The albums closer, "Onward" shows this in a blazing glory of encouraging voices that had me imagining all my buddies stood behind me shouting "Onward! Forward my friend!" while I walked away well armed to battle my demons. There are samples of what I think is John Hurt from the film version of V for Vendetta, which are placed well in the track and avoid any easy distractions, making it my favorite on the album but not only for that reason. The opener that is "Waves" carries a spurring tone with tumbling pounding riffs and a haunted chant to shouted incantations leading to upraising Post-metal style echoed licks. Towering repetitive riffs return building upon what came before as the Monachus ship sails proudly and defiantly towards a doomed Sun until their vessel is tossed into a huge swell of Neurosis-like noise-out only for the Monachus ship to burst forth into a triumph of melody that drives the track to its ending in minimal ambiance. In track 3 "Circles" begins an atmospheric drone that carries the track into a maudlin and quiet tone that drifts around the head and setting you up for the onslaught of driving heavy sludge that eventually collapses on you, bringing you out of your mind wandering like a brick to the head when sleeping. Arm raising and airy calls are brought in to lift you out of the sludge only for you to be dropped back in again to have your head pounded by galaxy sized riffs. The track shift-shapes into melancholy meanderings until a heavy thrust of sludge surges forward in triumphant celebration and thus ends yet another mighty fine album from Monachus.

"Below" is available now from Alert Anitfascista Records and from their Bandcamp.