As a listener, as a fan, what is the epitome of rock n' roll? What does a band have to possess, develop, or deliver to be at the height of . . . not greatness in the sense of fame and fortune, but greatness in terms of music recorded. Kyuss reached that level without ever achieving the fame and subsequent fortune they so richly deserved, and the stoner/doom world is littered with similar examples - Dozer, Truckfighters, Fu Manchu, Sasquatch, Brain Police - many that will jump instantly to your mind if not to mine. So, what is it these underground, unsung rock n' roll heroes deliver that makes them so special? Simply put, great music, but great music consisting of parts that stand alone as crafted impeccably, and that then come together as a phenomenal experience. Parts that are made up of agile, athletic drumwork, pulse pounding bass guitar, vocals of devilish delight, melodies that hook you so hard you nearly bleed, and above all, guitar made with the stuff of the cosmos, pure and brilliant and intrinsic to our very soul. Today's band, on their debut EP release, have managed to not only manufacture music in a similar fashion, with superlative individual performances playing masterful melodies blended into what will surely be for many fans of this pure form of rock a memorable and monumental experience to be cherished for years to come, but to add one more component to the mix that sends it over the top in pure reverberated bliss - excitement. Mojave Desert Rebels, to benignly state what will become obvious after listening to their album, enjoy what they do to a very high degree. This makes for a total rock experience that can only be surpassed in a live environment. Put on your tennies and keep your whiplash brace handy as you plug this hi test music in and spin all dials as far to the right as they will go. (Settle down, it's just a poor metaphor, not meant to be taken literally).
~~~~~~~~~~~~~~~~~~~~~~~~~~~~~~~~~~~~~~~~~~~ 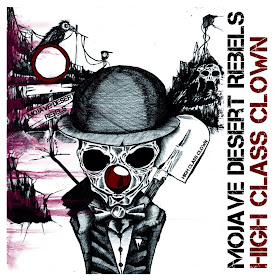 Hailing from Copenhagen, Denmark, and having only been together since 2011, the foursome of Mojave Desert Rebels have managed to leapfrog to the forefront of enjoyable rock music with their initial studio release of the EP "High Class Clown"


These guys take their cues from classic heavy hitters such as Led Zeppelin and ZZ Top as well as genre giants Kyuss, implicit in the name of their band. While the influences certainly exist, they have taken the tools learned and developed their own unique method of carving up the ether with distortion and fuzz, slicing through with a fierceness and joy rarely noticed in a band. "High Class Clown" is the home to four raunchy, rockin', four minute forays where excitement and ability blend for an unforgettable experience.

The EP kicks off with "Village in the Sands", a seemingly pleasant ditty that opens with an enjoyable melody of agreeable delivery that has a slight smolder at first perhaps going unnoticed in the totality of the music and not becoming immediately or fully apparent, never having a true switch, instead simply building in intensity until by the time the solo is unleashed, almost 2 minutes in, an all out blitz of emotion, volume, and distortion is in full bore ear plug mode. This is the introduction to Bentø's vocals, a powerful tool in the massive instrumental battery of these proxy desert rockers.

The title track is next up and unlike its predecessor starts off with a show of might. Hansen and Bentø showcase their muscle in slow flexion while Blanjean and Pröll drive it all forward in measured and powerful deliveries of rhythmic domination throughout the first half, all brilliantly in control of a tapestry of hot burning fuses that eventually reach the payload where a big bang of brilliance and expanding magnitude is unleashed. The payoff is a second half that evolves into an exquisite display of interwined brilliance and monstrous musicianship.

"Enemies on Fire" exquisitely opens with Bentø's plaintive wail of aching beauty that is soon taken up by riff, lick, hook, and fill from dynamic deliveries of deep instrumental distortion running through an escalating atmospheric ascension toward an incomparable crescendo of brilliance and domination.

"Towers of the Skies" rolls out heavy machinery topped by napalm delivery systems. Blanjean's basswork here is incredible - deep, nimble, and unyielding as the stanchion upon which Bentø and Hansen propel heat seeking missiles in a spreading arc of white hot brilliance and Pröll maintains a radius of staccato discharge. As this fuzz destroyer advances the intensity increases in a slow burning buildup of ferocity and proficiency until maximum output is reached at climax.

Not listed on the album but included as a YouTube video below is "The Desert Song", a slightly different, bluesier, equally intense and brilliant song. Check it out along with the EP on Bandcamp, Reverbnation, or Soundcloud.

I think you will be hard pressed to find much in the world of rock this year that delivers on as many musical levels as "High Class Clown" while also demonstrating  sheer pleasure and enjoyment in delivery. It is a brilliant debut from a band that is likely destined for some level of notoriety if longevity can become one more hallmark of the band.