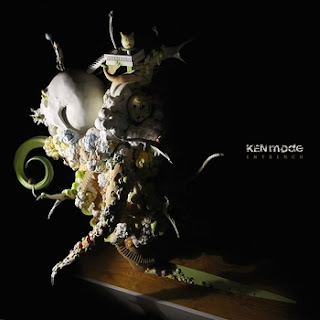 KEN mode: Entrench
I hope I am formally introducing some of you to KEN mode, the three piece annihilation machine from Winnipeg, Manitoba (composed of two brothers and a rotating bass player). Historically known for their fusion of noise rock and hardcore KEN mode bring an intensity and overwhelming sense of chaos to the choppin' block (cleaver included). KEN mode are like Converge and Dillinger Escape Plan's younger sibling... bare chest, gnashing teeth, and prepared to spar for for an alpha spot... and definitely not afraid to try something a little sly in the process (very much like their elder kin). KEN mode formed in 1999 and have since released four full length albums, with the fifth, Entrench, dropping yesterday (Tuesday March 19th) via Season of Mist.

Entrench's opening track Counter Culture Complex kick the album off in a very noisey and punk fashion , but not before a few taps on a drum head and a dizzying cello oscillation suprise the senses. The following tracks, and much of the album, stay true to the hardcore / noise foundation. But don't let these adjectives turn you away from Entrench, listen closely and enjoy the glorious loads of resonance and feedback from KEN's latest bassist Andrew LaCour. These three are creative and their injection of sludge leave an impression of experience and knowledge of their craft. Take my favorite track The Terror Pulse for a spin (click play below), and experience the discordant guitar squel and sacrifical tribal wallop with more of those sweaty bass-lines. Entrench continues to ebb and flow between fast paced chaos and slower sludge... even devling into the depths of doom. This finally brings us to our whimsical and relaxing outro Monomyth, which contrasts immensly from Entrench entirely. Here we are absorbed into an airy atmosphere filled with reeling cellos and gently plucked strings. A finish that allows us to catch our breath and speculate. How does a trio of testoterone with the cojones to name themselves KEN (Kill Everyone Now) mode get off finishing an album like that? I haven't a clue and, quite honestly, I couldn't care in the least. All I know is I'm impressed. 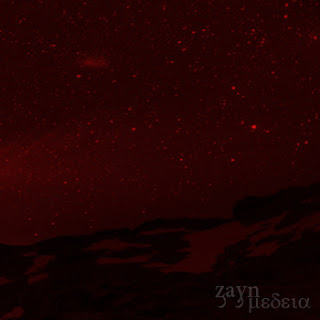 ZAYN: Medeia
Some two years ago, inside the confines of Bjelovar, Croatia four persons banded together in search of an experimental purging. Choosing a name and a path, ZAYN came into existance and began their orchestral journey. Avoiding standard musical architecture, ZAYN's instrumental approach mold post-rock into jazz, doom and desert rock. All this variety will certainly overwhelm listener's senses. The musicians also employ minimal repetition, allowing the songs to grow, writhe and transform. This can be strange for any desert, doom or stoner fan... because we happen to like our repetitive RIFFS! That's okay though ZAYN have other ways of captivating the conscious and it all begins with static strumming and some desert rock intensity. ZAYN's debut album Medeia sets off with album opener In love, In anger, In vain. Medeia is based off an ancient Greek tragedy in which the grandaughter of the sun god is abondoned by her bewitched husband and seeks revenge through the slaying of her children and to fleeing to Athens on a firery chariot only to find herself in another sultry situation. Without further SparkNotes, album opener In love... sums up the emotions of a confused and enraged mother all to well. The music flows and corresponds to the story quite well using fast paced hammer on's and plenty of use of heavy and loud moments contrasting with hushed stillness. Each track seems to find moments of doom and loads of Miles Davis-esque timing, making each living moment of Medeia incalcuable. Check out the hodgepodge of genius in my favorite track Motherismus below and if you think you can handle more get over to bandcamp, because our friend's in ZAYN are offering this evolutionary piece of music for FREE!