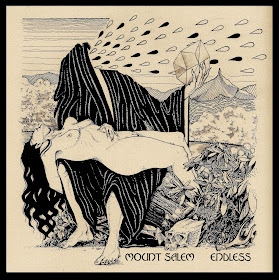 Mount Salem is a doom/occult outfit from The Windy City. They recently released their debut album. I've listened to said album and it is good. Here's a break down of the album, with my usual track by track descritpions.

Good Times starts with a spoken word sample of Charles Manson rambling on about the push pull of modern life before he's trampled by a Golem of heavy doom. The song walks tall, an organ lurking in its shadow, and the attack is heralded by the vocal power of Emily Kopplin. Lucid  is Heart's Magic Man if Ann Wilson was singing her love song to the devil. Full Moon starts with mellow guitaring and conjures a coven gently swaying before a wicker man aflame. But three minutes in  the whole thing topples down and the intensity picks up, Cody Davidson's drums call forth the heavy riffs and the banshee vocals take it from there. Mescaline is an instrumental with shimmering guitars, yearning organ, and perfectly placed explosions of the heavy we all hold so dear.The album ends with The End a tune that starts with the organ up front before the keys are joined by gee-tar strings and the two dance madly while the drums and bass do what they can to keep 'em in line.

By the end of this album you can tell the band really means it. Their album does not lack heart and blackened soul. There will be Blood Ceremony comparisons. But Mount Salem swapped the fluting of their Canadian peers for a a heavy doom sound befitting the city of big shoulders, hog butcher for the world. They're touring now. Show 'em some love live or online.