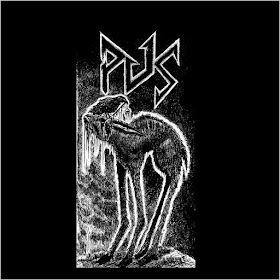 This is the absolute worst fucking time of year. Wake up and pull back the curtain. You'll get smacked square in the temple with bleak skies, icy roads, and the understanding that you'll spend the next six weeks rising from bed to six-degree temperatures and coated car windows. Shit, even football season seems like a high school memory. Plug through February and you'll find March to offer little solace, as every drunk asshole drinking green beer tries putting his tongue in your girl's mouth. I'm gonna throw up just thinking about what's promised by these next few weeks.

I had to dig back to 2012 to find the perfect complement to my emotional shittiness this Sunday. I went looking for trouble, and I found PUS. These assholes from South Wales blended a perfect lo-fidelity mutation that goes down smoother than a bowl o' snot and hotter than the world's cheapest whiskey. Produced by and featuring members of Sunday Sludge darlings Spider Kitten, PUS spew this six-track debut EP and refuse to clean up a goddamn thing. The band's grim thickness is unsurpassed, while the absence of overproduction gives the disc's underbelly a creepy credibility.

Perhaps you should've stayed outta your stepmom's dresser. These six horse pill horror-fests move in every direction and buzz-up the back of your brain quicker than a blast of airplane glue. The riffage of opener Colossus erodes skin and bone, morphing into splintered licks that parade behind a muddy mask of evil. Pressing through a wet wasteland, fears are only slightly eased as the band seeps toward the doom-heavy intro of The Black Swordsman. Track 2 sways and slays beneath a distant-torture "vokill," buzzing like mutant fly-children. The not-so-easy rolling sludge horror owes a debt to AL's super-heavy low-end, which is as dense as it gets. I feel better already.

I love a shrill feedback intro, provided it's short-lived and leads to a contrasting, low-burning attack of mental anguish. PUS repeatedly administer just enough ear-screech to barely induce my cringes. The steaming cracks of Image of the Dredd Law steadily rise toward hollow echoes, remaining cavernous and true to form. A failure to contain oneself is hardly a character flaw, and the misery herein is mutually-assured. Holding some of the album's slowest sludge moments is a high compliment, and this shit has quickly become too thick to escape.

And who says a Welsh sludge act can't make you laugh? You'd need a lyrics sheet to fully grasp Your Mother's Arsehole, but it likely got burned up in your buddy's basement. Crawling and clawing through thorns is barely half the story, as this steamer pulls off the wheels to escape fragmented guitar. The shrapnel pelts your skin anyway, and you can't help but laugh as you spend the next few days picking at scabs. And hey, don't lose sight of what's happening around you. A Cross For All To Bear is a quick-fisted bully with a nose for paranoia. Doom unfolds amid hair-split guitar, but the sound is far too huge to contain. PUS say fuck it, slow down, and sneer at your gaping mudhole. Oh, are those pain meds kicking in? Good luck swatting at nothing.

You won't know what to make of the reverb-soaked closer. PUS is a heavily-distorted cloud of slow black smoke that trembles and warbles at a distance you feel is safe. Fucking forget it. Rob and John gnash at one another as rhythms comfortably observe from the love seat. That ominous howl that creeps about is simply taking steps toward defining the band, but there's really no clear categorization. Army-crawling toward a false shelter, the crusty crunch grows frightening and incredibly executed. A winter hymnal closes out the EP to establish a complete juxtaposition of everything that just bloodied your broken body.

It's difficult to hear this in your living room, your car, or your neighbor's garage. Here exists an expansive shroud of gloom that is normally reserved for news stories about the third world. Your walls are too thin to contain this sonic dread, but they also can't protect you from the churning evil PUS have promised. Call it a mindfuck, but your time is better served seeking forgiveness than truth. This sludgy trip won't end well, and that's your only certainty. Don't let the weather get you down. PUS do a pretty good job all on their own.