One of the most oft used lines in recent culture has been that of The Grateful Dead's "what a long strange trip it's been". This could well be used to describe the musical path that young Mr. Greene traveled to arrive at the excellent, hard rocking, and intelligent debut album "Directory of Thieves". His story is intriguing and fun, his music is raucous, raunchy, and full of retro rockin' grooves. Hot Lunch, as a band, are new, but the members bring loads of experience that matches their musical prowess, allowing them the opportunity to create some granite blasting, face melting, one of a kind brand of music. The trip for them may or may not have been strange, but it surely has been long, which bodes well for those of us who get to hear their incredible music. Today, the Atomic Split steps into an alternate universe where the music draws on much of the past to create something special for the present, with hope that more is in store for us in the not too distant future.
~~~~~~~~~~~~~~~~~~~~~~~~~~~~~~~~~~~~~~~~~~~~~~~~~~~~~~~~~ 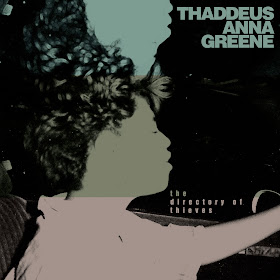 The first thing you think of when listening to "Directory of Thieves" is Jimi Hendrix, and there is certainly a strong element of Jimi's style on this album. It's refreshing to hear something new that could've been his, but more importantly the music is simply good, intriguing, and loads of fun, something that would be evident to a generation of rockers who may have never been introduced to the Hendrix catalogs.

Thaddeus Anna Greene are a three piece band comprised of:

While Thaddeus Anna Greene is the progenitor of the band's songs he is more than ably accompanied by bandmates Matt and Anthoni, who contribute greatly to the finished products on the album. Both demonstrate dexterity and vision of their own in blending the rhythm to Greene's masterful guitar work. Long before forming this incredible trio, though, Thaddeus had begun to teach himself the guitar at the age of 14, spending untold hours in his room figuring out the intricacies of chords, keys, riffs, and solos by emulating his favorite rock magicians Jimi Hendrix, Jack White, Stevie Ray Vaughan, and the Black Keys. The strange part of the journey is prior to this point, beginning with his introduction to music through his father's indie record label where the music was solely gangster rap. His early musical penchants were for Michael Jackson and Bone Thugs N Harmony. From there he fell in love with . . . Fall Out Boy. Yes. You read that correctly. Keep in mind we're talking about a young man who had yet to reach 14 years of age and had very little access to rock n' roll of any sort. Glam metal of the 80s became another big influence, and between the 2 styles of music a young Thaddeus Greene picked up the guitar wanting to emulate the sounds he loved. From the rococco of 80s glam metal he eventually came full circle to the songs of Jimi and the blues of Muddy Waters, among other blues rock influences. This is where the strange trip began to turn to one of genius and delivery. Not only did he teach himself how to play the guitar, and not only did he learn to emulate all of his favorite guitar wizards, he found within himself an ability to create a new kind of magic, something all his own, something unique, and most importantly, something important because it was GOOD.

Thaddeus has developed a style of music that is both recognizable as music similar to thousands of songs we've loved through the years, and equally discernible as something we've never quite heard, which makes for excitement when listening to the songs of "Directory of Thieves"

The first full length song on the album, "Driving Dr. Gonzo", is a definite nod to Jimi Hendrix, sounding like something Thaddeus might have found to play as a cover, but instead it both shows his own song writing ability and pays homage to a rock artist legend. On this song we are introduced to 2 incredible things about Thaddeus Anna Greene's music; the first, of course, being his guitar, full of power and effortless grace; the second being his incredible voice, deep, rich, and vibrant, soulful and sugary sweet.

The next three songs are heavy blues rock pieces, laden with fuzzy guitar, rife with beautiful vocal delivery that doesn't conform to typical blues lyrical repetition, but instead plays out like standard rock tunes, moving seamlessly and enjoyably through the songs in a mesmerizing odyssey.

"Let Me Be" has Thaddeus stretching his writing chops and coming through beautifully. For me it has a nice original sound to it, incorporating what he knows with a vision of how to play it out in a style all his own. The guitar is haunting and deliberate with an incredible extracted solo of sheer beauty and grace.

"Midnight Snow" is the bittersweet loss of affection and the unrequited love of the one you just knew was the one, all magnified through the prism of blues rock guitar, where heartfelt hurt comes in the form of razor sharp solos and incredible riffs of soul scarred clarity.

The penultimate tune, "No More", is a powerful play of deliberate, forceful pace, relaying a haunting tale of woe and pain and pent up anguish. This song demonstrates a maturity of song writing ability, refraining from simply throwing guitars tricks and laser beams at the song, but instead laying down a preciseness that accurately reflects the discomfort felt by the teller of the tale.

The closer adds a bit of a country / americana twist before ending with a sample that seemingly describes a nuclear blast, but perhaps, instead, gives fair warning to anyone who cares to listen that the radiation initially felt is only a precursor of what's to come. We can only hope this is indeed the case.

"Directory of Thieves" is available as a download from bandcamp, Amazon, as well as iTunes. 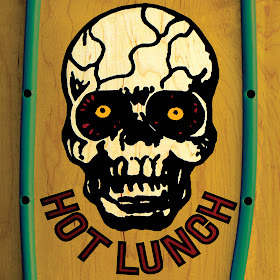 In San Francisco Parchman Farm was well known and well liked, but not destined to stay together. Eric Shea, the lead singer for the ill fated band, knew he wanted to continue to create and play punk n' roll music, so called on some of his favorite musicians from other area bands to form Hot Lunch. He was fortunate in obtaining the services of Aaron Nudelman on guitar, Rob Alper on drums, and Charlie Karr on bass. For those of us unfamiliar with the San Francisco skate and music scene perhaps this incorporation doesn't mean much beyond the obvious sound they were able to create and display on this debut LP, but for Shea and Nudelman it was, to use one of the worst cliches ever, a dreamteam of raunchy, raucous, raw, and ridiculous punk acid rock n rollers the like the world has never heard and will likely never hear again beyond whatever Hot Lunch conjures beyond this initial release.

Hot Lunch are incredibly unique, fitting no mold, no genre, although they do have a similitude for some of the bands reviewed in past posts on Heavy Planet such as Lecherouse Gaze and The Shrine. I would even say there is some similarity to Admiral Sir Cloudesly Shovell. Similarity means only sharing some aspects. Hot Lunch are an incredible blast of hot dragon breath melting your face on every riff and frying your bones with gatlin blasts of molten solos. The particular heat, intensity, and smell of what they produce isn't replicated anywhere else, nor should it be. If you think you can take it, and I'm sure you can, stout hearted purveyor of Heavy Planet, dig into some Hot Lunch, morning, noon, and most especially night.

Right away on "Handy Denny" you are treated to the raucousness of Nudelman's guitar, it's overwhelming power and drive, and the multitude of layers laid down throughout the song. Nudelman is a virtuoso of cutting loose and playing dirty with purpose. Shea's lyrics only enhance it immensely. It's a controlled screech, a wail of the bastard son of a wendigo raped by a banshee on tour with a 17th century traveling Irish circus. All the rock bands that use the guttural growl for vocals could improve greatly on their music by switching to something with this kind of sheer and exquisite effluence.

Throughout the album you can see why Shea and Nudelman heavily recruited Alper for the drumwork. Delicate opening interludes or all out assaults are handled with equal dexterity and exultation. This is rhythm work that doesn't sit in the background, but rides up front with the main drivers, exhorting directions in which the troupe should take.

And lest you think the bass sits under the stairs as so many do, it's not happening here. Never to be outdone by the flashy frontman and his axe wielding accomplice, Karr plays the bass dexterously and energetically, piling up heavy, dripping, sludge that coats everything in a perfect glaze of  rock and roll gravy. Perhaps the best example of his dexterity and grace is displayed on "Tragedy Prevention".

There are ten tracks on "Hot Lunch". Pick one if you want. You can't find one that will bore you, or that you will ever think to listen to just once. Taken together they are a tremendous ride on top of Panzer Division tanks blasting through urban streets of old concrete and corroded steel, filling the countryside with a sound that trumpets the coming of awareness and excellence in foreign yet exciting cadence and timbre.

"Ripped at the Seam" is a perfect example of how a band can conjure pure excellence using sounds and tempo fitted to match perfectly to all contributors. It's a hot furnace blast of pure exhilarating energy.

Just when you're in a groove of heavy punk n' roll, Hot Lunch throw a curve with a Medieval Fair offering in "Lady of the Lake" that still manages to out raunch the most lilting of Emerson, Lake, and Palmer style music, making it incredibly intriguing and totally gorgeous in its audacity and impeccable delivery.

My favorite song on the album is the one that takes you on an eight minute journey through the best of the exquisite sounds Hot Lunch fry up and slather with punk n' roll grease on a hot summer day. Starting out like some perverted Gregorian chant it slides right into the main groove that somehow plays on a deep tribal rhythm coursing through your core, energizing that part of your inner soul over and again, continually adding layers of spectacular guitar, moving the tempo in and out, rolling a flurry of drumwork, bomb blasting the bass, slowing down for the monks to echo a chant before revving the engines again for flight on Nudelman's guitars and dispatching enemy intruders with Shea's glass shattering vocals. It's just a beautiful ride of a song that is as enjoyable to experience as a song can possibly be.

Hot Lunch has an official release date of March 12 at which time it can be downloaded from iTunes, where you will get 2 bonus tracks, from bandcamp, and from Amazon, where you can either download it, get the CD, or order the vinyl.

The Atomic Split today provided some pretty groovy music, special songs, and incredible performances. I suspect one or both of these albums will show up again in 11 months when this 2013 journey has come to a close. We'll see. There's a long way to go and lots of great music to discover. Today we discovered some of it, to say the least