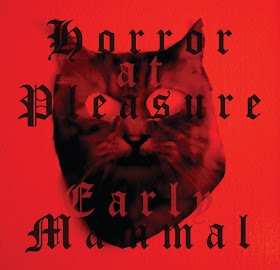 I try to start these reviews with an anecdote, a little something to get the readers attention or situate the album I'm reviewing in time and place. But I won't be doing that for this one. Early Mammal says all our stories are fucked. So I'll pass.
The album starts off slow, with a short guitar piece titled Right Hand, which sounds like it was beamed down from an alien space craft straight into discarded desert amps left behind after one of those infamous Kyuss generator parties.  As this piece ends, the urgency builds then blasts into Final Witch where we’re greeted by a vocalist who’s got the psych ward pipes of a young Iggy Pop. The track is an interesting blend of the primal throbbing of the Stooges and the atmospheric Hawkwind, whose influence can really be felt in the cosmic noodlings laced throughout the next track. That track, Demon or Saint, is a creepy plea for a girl to meet the singer “in the woods” and offers up heavy chunks of fuzz guitar. The next track, Coming Back is a short instrumental interlude which gives the listener time to meditate before the organ heralds the return of the demented vocalist, begging for a "little time" on To Find Me Gone. Money Shot comes up next, and he proclaims "he stays out late, cause he wants to" in a voice so deranged one would be crazy to argue he shouldn't stay out late, for fear of a gleaming shiv meeting yer soft innards.
It's around this point one wonders if the band isn't a little off, if they aren't simply aping the prosimian stomp of the Stooges but actually living that raw power life, all guitars and drugs, and drugs and drugs. Anyway, whatever they do in their spare time ain't anybody's business but their own, so back to the music. Next up, track seven by my count, is Checking the Bullshitter's Queen, a longer, heavier instrumental piece than the one's you're used to finding on this album. And one instrumental leads to another, this one another short interlude, titled Going Out, which sets you up for the longest track Resurrection Men. Clocking in just over nine minutes long, it's got it all; layered vocals, tortured wails, organ, geetar, and a warning about them "looking in through the window...". Don't say they didn't warn you. The album ends like it began, with a softer instrumental piece titled Uncle Scary's Left Hand. And that's it. A great album. Reminds me a bit of the aforementioned Stooges, Hawkwind, and the heavy weirdness that was QOTSA’s Rated R. This is grade A grime. Get some. April 1st on Devouter Records.