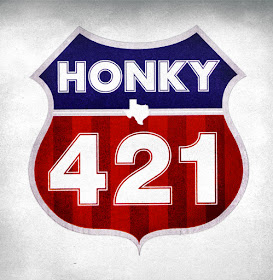 Featuring Jeff (JD) Pinkus, the bassist of one of my all time favorite bands, Butthole Surfers, (I'm such a big fan in fact that my right arm is tattooed with numerous buttholes, yup).
Any member of Butthole Surfers who spread themselves to form a band of their own gets immediate thumbs up from me.

Honky have been around since 1996 and 421 is the sixth release from this hard rocking, hard drinking and hard toking trio from Texas.

With a current line up of JD Pinkus on bass/vocals, Micheal 'Night Train' Brueggen on drums/vocals and Bobby Ed Landgraf on guitar/vocals, Honky come with 11 tracks of superboogie down, stoner rock heavy good time rollers.

With beards of legendary repute and admirable tattoos, Honky are the perfect triad for their psychobilly southern rock sound with each song played and sung with gusto.

Each track is expertly executed by these Texas gentleman and each had me rocking out, horns lifted and nodding my noggin. Some tracks are fast paced and low down dirty rock monsters and others are more slow grooving and bluesy but each track is unmistakably tasty southern fried goodness with some very heavy and fuzzed up bass riffs on occasions, epically jammed out guitar riffs and stomping hoedown drums. Man, I wanted to get loaded on good whisky and powerful bud while listening to this long player; a perfect accompaniment to Honky's party vibe.

Honky are playing my home town at the end of March and I will damn well make sure I'm in attendance and will no doubt partake of the whisky soaking and bud smoking, hoedowning and flashing my buttholes in appreciation.