The latest track from French Stoners Los Disidentes Del Sucio Motel involves some grinding rhythms, zombies, and a glorious RIFF for the ages! The single is entitled "Z" and is a precursor to what awaits listeners on their upcoming release Arcane. The quintet got rollin' some seven years ago and have since released an EP, a split, a DVD and their debut album "Soundtrack From The Motion Picture". Quite the resume, huh?? The band of brothers have also shared the stage with some killer acts including Karma to Burn, Ufomammut, Red Fang and Valient Thorr. You aren't sold yet?? Well, check out the music video for "Z" below and we will be sure to keep you updated on Arcane's official release date. 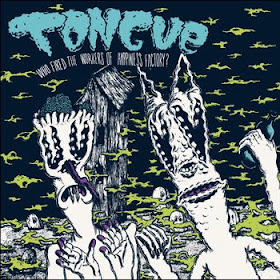 Tongue is a Serbian one man project... and the man with the tongue is Vladimir Bizic or Ripkid for short. Ripkid's background lies with a hardcore-punk band, Lets Grow. The group has since dissolved [circa 2010], which is a total downer for devout punk enthusiasts. However, the extra time has allowed Mr. Ripkid to focus his creativity in a more stoner and experimental metal direction, which is good for us. A Night You'll Never Remember Volume 1: Who Fired The Workers Of Happiness Factory? is the first installment of what Tongue hope to turn into an EP trilogy.  The music is a calculated balance of psychedelic rock with a whole lot of feedback... kind of creating an eerie Rocky Horror Picture Show vibe... or maybe its just the lips. Either way, the EP is FREE so you know what to do!