Sunday Sludge: Pigs - "You Ruin Everything" 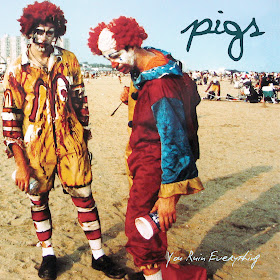 I guess I was in one o' those moods.  Saturday night turned into Sunday morning, I accomplished absolutely nothing, and every person in my life went fuckin' bananas.  I discovered a struggle to breathe, an ache in my lower back, and the realization I could never hang with the younger crowd in the first place.  Fuck it.  Perhaps I needed an album that oozed as much disdain and misanthropy as I held so tightly.  But Brooklyn's Pigs boasted a disenchanted smother that made short work of my mood-swing tap dance.

Formed in 2008, Pigs is the stitch of three wandering souls who cut their teeth playing in bands like Unsane, Freshkills, and Converge.  I'm not sure who's responsible for bringing together these three in a studio, but shake his hand as you kick him in his balls.  There's an element of discomfort on You Ruin Everything, but it's a discomfort you expected.  What you didn't expect was accessibility or relief when the band gets REAL nasty.  Let's say your fuzzy head is buried between the legs of the next Shannon Tweed and she happens to reek of the sea.  But when she farts, it's a breath of fresh air.  I guess Pigs sound a little like that.

From the opening stomp to the album's hazy-drone fadeout, the noise-sludge cements this disc as impossible to toss.  The slow, ungodly Give It is as low-slung as it is utterly vile, occasionally amping the sour and spreading the sticky.  You feel as sweaty and agitated as the band, swollen by Dave Curran's guitar blisters.  The rhythm sticks to just about everything, complete with an unidentifiable fuzz that hovers above the noise-boils.

The album contains several surprisingly quick moments that fail to detract from the mire.  Whitewash  is up-tempo noise-punk that's merely punctuated with bouncing sludge.  Curran's vocals remain shrouded and disenchanted, guitars sputter skyward, and Andrew Schneider's bass scrapes everything into hell.  Contrition Dilemma, for all its punk groove, is loaded with crusty ambition that migrates toward the sky as Jim Paradise thumps for scraps in the most hollow of drums.  The ease of Mashantucket is broken by the spit of Curran's sand and salt.  Every note is perfectly crafted and executed, spitting fire without relent.  Drums pulverize, guitars blister, bass drags... Throughout everything, Pigs remain looser than your aunt Tina.

The crunch and squish of Drained is nether-worldly.  Crawling beneath a clunk-guitar escape, listeners are summoned to gargle glass and cough-up animal fat before they're allowed to leave.  The ambition of Outburst Calendar can't mask the low suspicion.  Strong grunge rhythms marry accomplished musicianship and the band reveals how seasoned they really are.  The album's evolution begins here, as anger truly manifests itself and listeners grasp exactly what the album spills.

But don't let their pedigree fool you; Pigs can get plenty weird.  Backwoods bullshit is welcomed on Scrum, one of album's sludge highlights.  All elements finally meld their misery, but the grind is only half the struggle. These gears are dried, broken, and pissed off.  When the noise begins to careen, you realize the band had nowhere else to take this sound.  Drums march on Small c Celebrity, accompanied by cautious-guitar tip-toes. Schneider hides his bass behind trees, shaking his dick at passers-by. Curran's scream breaks the tension and fully embraces the thick discord. Just accept this, folks... The track bounces and scratches, but ultimately it breaks down and melts far easier than it really should.

Bookending with the tandem of At Least It's An Ethos Parts I & II, You Ruin Everything leaves no question as to whether Pigs can marry divergent styles with songcraft deserving of celebration.  Part I pulls a cool, pensive drove that throbs with emotion.  The angry toil through wet leaves is packed with pensive composition, hidden with a blanket of lament and disgust.  The chorus is somehow strangely, disturbingly melodic, and you haven't  heard anything so loose and so thick all at once.  And Part II... the slow haunt is met with powerful samples that somehow don't detract.  Sounding like the comforting voice that's not, the track appears to push modern medicine despite its failures.  A slow grind of organs and bones finds its place amid the filth.  If your wheel ain't greased, you ain't been payin' no mind.

If Pigs ever chose to clean up their act, they'd still remain the filthiest band in New York.  I'm not talkin' GG Allin-filthy, that's fucking ridiculous.  The loose, greasy tones contained in these eleven tracks replace your giddy nod with the slightest of twitches.  Spin it, say your prayers, and hope your hands don't shake so badly when you wake up.  Pigs aren't gonna cure your ills or pull you from the dry well, they're gonna jump down there with you.  And by the time the police show up, each of these songs is stuck on your tongue.