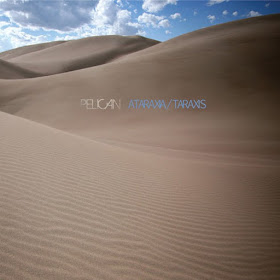 These bands we love, what they do to us. It's fair to expect Pelican to shift, drop, or fucking boil down completely. We've seen it from lesser bands. We still love our metal, our post-metal, our anything-heavy-enough-to-drown-our-incredibly-awful-day metal. Pelican's been our safety for far too long, and I'm sure they're fucking tired of hearing that. What they've also been is a consistently proficient and focused instrumental quartet within a metal landscape riddled with inflated egos and ridiculous over-indulgence.

With 2009's What We All Come To Need, Pelican cemented their sound, their audience, and their expansive and seemingly endless borders. There's no safe categorization, no easy assumption. Pelican have paid their dues, garnered their accolades, and continually amazed countless listeners with an amalgam of progression, power, and potency that (sadly) other bands no longer drive toward.

So it's easy to assume, with such lofty expectations thrown upon Pelican's shoulders, they'd steer the course and provide loyals with a complacent contract obligation-type record and play the game. Hardly. This Ataraxia/Taraxis EP demonstrates both the band's fidelity to longtime loyals and their open arms to fresh ideas. Pelican do more with this EP's eighteen minutes than most bands do with a greatest shits collection's double disc. Yes, I said "greatest shits" because Creed is performing in my state (also Pelican's) this week and my only defense is self-induced vomiting.

Ataraxia hovers just above your consciousness with a cool, buzzing atmosphere until that jet descends under Bryan Herweg's bass grumble. Pensive, honest, and pretty fucking spooky, the electric piano/xylophone measure is desperate and elastic enough to tie together every element of every Pelican moment without detracting from what lies ahead. Less an intro than an omen, we're welcomed into a dream sequence that flirts with tonight's nightmare. It's gonna tickle your pre-frontal cortex and stick with you beyond your breakfast.

Pelican are at their pinnacle when they balance the technical with the absolutely fucking beautiful, which has never been more evident than on Lathe Biosas. Guitarists Laurent Schroeder-Lebec and Trevor de Brauw trade choppy stutters with drifting harmonies, and Larry Herweg's drums punctuate with endless ellipses humming a subtle thunder. The fuzzy, post-metal drone threaded throughout the track is refreshing and draining, and the bounce is never cartoonish or spoiled. These notes will drain listeners for days.

Pelican utilize Parasite Colony as a reminder that they're still Pelican, but they're willing to shorten the stroke and sweeten the spark. Buzzing, candy-coated riffs and rhythmic jams are strewn with an ambiance that lays your jaw to the ground with a slow-motion push. This is an accomplished, sand-caked progression toward ever-escalating volume and scope, the band's trademark throughout each song, every album, and their entire career.

Taraxis bookends the EP with a cool pick and perhaps the bracing of an impending winter. The distant guitar plucks manage to stay grounded and allow an unsettled screech to emerge. There's pain here, evident by the succession of melodies and penultimate buzz. The pause is hardly a relent. As we're met by fewer sounds, listeners detect more intensity. The incredible fusion of crunch and evanescent beauty likely marks this as 2012's best exit.

Ataraxia/Taraxis is only the most recent in a string of Pelican's assertions that they lead the pack of instrumental outfits. At times illusory and other times heavy, this EP is considerably expansive for its brevity. Pelican's musicianship remains unmatched. The contrasting moods and harmonies here will enthrall listeners and likely push the EP onto more than a few "Best Of" lists. This isn't the first "can't miss" release of 2012; so far, it's just the best.