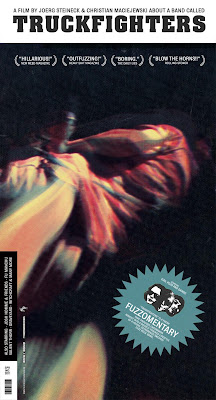 The drone of winter isn't exclusive to mid-America. The cold, packed earth crunches under my Chuck Taylors just as it does under those of Truckfighters' Ozo (Oskar Cedermalm, bass/vocals). It's easy to immortalize three guys who play on an elevated stage or craft a sound so huge that your chest rattles if you get too close. When documentaries explore the backstage, on-the-road, and at-home lives of rockers you can't get enough of, so rarely is found symmetry between god-like stage persona and sound humility.

Where many rock-docs sag is where this Truckfighters Fuzzomentary sails. Perhaps the small-stage sphere is more appropriate for capturing the intimacy between band and fan. Viewers aren't witness to cock-rock bravado following a gig at Wembley hosting 90,000 (no fist-pumps, no inflated egos). The meat of this film takes place in clubs where 25 screaming fuzz-o-philes are shoved into sweaty one-anothers and don't give a shit if they're leaning against amps. And how refreshing is it to see a frontman agreeing to play a show in return for "gas money, food, and somewhere to stay"?

The humble beginnings only serve as a tributary to Truckfighters' humble present and future. Narrator Chris Cockrell (of Kyuss, no less) introduces the film as "a good story about three down-to-earth guys." These are men with jobs, children, bills, fights, car-problems, and serious fucking ambition. It's impossible not to fall in love with a band so determined, so tireless, and so thankful for every listener they've enlisted with their expansive, focused buzz. What's not clear, however, is how they haven't managed to become the most important band in the fucking world.

Based in Örebro, Sweden, Truckfighters never get too wrapped up in themselves to focus on making woolly mammoths of records. The film demonstrates a unique and brotherly relationship between Ozo and Dango (Niklas Källgren, guitars), one that can only result from a shared path and vision. Late to the film is Pezo (Oscar Johansson, drums), who holds a clearly different approach from his mates. Sure, jest is made of his quasi-religious pleas to God for the strength to drum and his argument that "the clock is not a real thing. It's just made up by man." But the divide between Pezo and the Ozo/Dango tandem begins to punctuate the film's point. Honestly, what fan doesn't mind waiting a few extra minutes when Truckfighters open a set with a live fuckin' Desert Cruiser? And when the amp breaks, audiences are privy to an improvisational jam. Works for us. 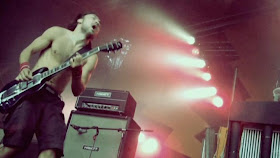 As non-linear as the film may appear, distinct moods, methods, and motivations emerge. Nine chapters form the film, though the final two chew the bulk of both time and relish. Pezo's self-critical preoccupation rises just alongside the band's allure, as larger stages and audiences loom. Sure, Truckfighters serve a loyalty to the fans filling local venues. But the band's reach is becoming undeniable. Cameras again take viewers backstage following a club show where Pezo enjoys the atmosphere as much as anyone. So when the film abruptly announces Pezo has quit, it's as much a kick to the nuts of viewers as it is to Ozo and Dango. Though critical of Pezo's practice and time management, they can't deny he's "a hell of a drummer."

Oozing humor, the film is almost a counter to the gravity of the band members' everyday lives, Pezo's departure, and the struggle to find his adequate replacement. Recruiting a roster of A-list stoner rock heroes (Josh Homme, Nick Oliveri, Vic Du Monte, Rob Oswald, Alfredo Hernandez), Truckfighters lament never fulfilling their dreams of stunning audiences in the U.S., Japan, and Australia. Laugh all you want when Josh Homme claims the band influenced Kyuss, but nobody's convincing Josh to say that shit for a band that hasn't EARNED his accolades. The end sequence is so tongue-in-cheek that you don't need to seriously question it. But it doesn't take long for listeners to realize Truckfighters won't be "their band" for long.

Truckfighters plays up the band's "stoner" and "desert" labels plenty. But it paints a picture different from the band-focused documentaries to which you've grown accustomed. It's certainly no Stop Making Sense-like concert film. We're going deeper than that. Nobody's getting stabbed like they did in Gimme Shelter. You won't find any of these three Swedes shooting heroin, self-destructing on stage, or developing a God-complex a la Anton Newcombe in Ondi Timoner's Dig!. And as for Some Kind of Monster, well... this film nurtures a respect for the subjects.

Beginning with Örebro's wintry fields, moving through the mundane "coma" of everyday life, and ending on fuzzy, promising highlights, the Truckfighters Fuzzomentary never loses sight of the priorities of the everyman. The band is never over-inflated or over-indulgent, nor is the film. The style so well delivers the band's dogma that anyone who's never heard of Truckfighters will love both film and band regardless. Steineck's countless hours sidelining the trio, trimmed to 84 minutes, is as effective a paradigm as there is in terms of focus, perspective, and influence. If every rock band could be more in love with the music and less with themselves, we might realize a broader escape from the jobs and lives that kill us. I don't know what I'll do if this band doesn't conquer the world. Maybe just move to Örebro.