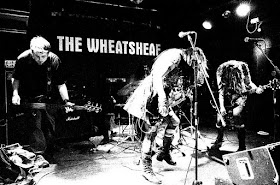 Timelines notwithstanding, imagine Layne Staley and Donita Sparks locked in a tryst, aiming to give the world Oxford's Undersmile. Slow, dense, and often ominous as a clouded demon, Undersmile deliver sludge/doom in its stickiest, sexiest sense. Envision the weird goth chick in your Biology class actually being as fucked up as her smeared lipstick promised. That's what this boot-clad mud-trudge four-piece sounds like.

Naming your band after a vagina may give the impression Undersmile don't take themselves too seriously. Maybe they don't, but you wouldn't know from checking out their releases, A Sea of Dead Snakes and the evolved "Undertaker" EP. The grime caked on the seven tracks spanning these discs is painful, eerie, and uniquely muliebrous.

2010's A Sea of Dead Snakes opens with the hilariously-titled Instrumenstrual, a deliberate plod through tautology, complete with lantern-crackle drums and desperate guitar roll. Undersmile extend the toil on Cutters Choice, hiring death to push a meat cart and gather bodies. Guitar swings like a depraved pendulum, sharpened and slicing through boney bass crunch. You'll soon find yourself lost at sea, scratching at your own face with rusty nails pulled from wet planks of sludge.

Crab People opens the door to a crunchy, fuzzy meat locker that slowly snaps necks with guitar pull-back and a rhythmic tin barrel toss. Tom McKibbin and Olly Corona-Brown yield a tempo stumbling through a damp, haunted forest. As you're slipping on mossy logs, the measure builds to both a sense of urgency and sense of "fuck you." Find something to grasp, as open-mouthed groans marry distant sirens for a frightening death blow.

Thumbing a sludgy coil, Spore drops a collossal tempo shrouded in a putrid green mist. Vocals are cold on listeners' necks and the stroke lumbers like a drunken yeti. Licks scrape and hurriedly scurry from under the foot of one-eyed giants. The carry-out is a perfect dissolution of filth, slowly reveling in misfortune and darkness.

Undersmile's crowning achievement is Anchor, their heaviest and slowest offering. Vocals circle listeners like playground bullies poking at your ribs. Guitars hover as helpless spirits dissolve. Rhythm is held back in a factory churning out smoggy misery. A revved up surrender counters the sea of doom we've floated in for twelve minutes. You're gonna love this.

Undersmile perpetuate a hazy acceptance of the unnatural; a slow bounce through a dark underbelly you've managed to thus far ignore. Let them chew up half your morning and see if you're able to shake it. I suppose Halloween's essentially here, so maybe you can treat this like the best of horror films. Enjoy it, nervously laugh through it, and ultimately hope it won't keep you up tonight. But like any staple of the horror canon, these tracks won't let you rest easy.

...While visions of Undersmile danced in their heads...