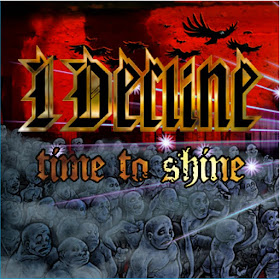 Heavy Planet doesn't receive many radio-friendly submissions. And let's be honest; we're cool with that. Whether it's catchy pop hooks, glossy production, or ridiculous and watered-down collaborations, much of radio's menu has no place on Heavy Planet's radar. Chicago's I Decline have arrived to blur the line between the heavy and the accessible.

Time to Shine is I Decline's third release, kicking in doors of autonomy via twelve seditious slivers of despair, hope, resistance, and redemption. Bands normally can't get away with being this ambitious, though I Decline back up every note with meticulous instrumentation, persuasive delivery, and brilliant direction. This isn't that irritating go-getter from your high school's student council. This is a band impulsively busting shackles and rising from complacency.

Wait a minute. I've gotta be careful here. I'm about to use the word "ballad." A New Nation slows down and channels C.O.C., adding hand claps and muddy bass to Clean My Wounds-ish stops and starts. The mood is despondent but hopeful, and the sound is soaring and earnest. Don't let the term "ballad" turn you off. When it's handled this well, there's enough room for everyone. Even the most rugged of thrashers will find himself barking along. And speaking of singing along, Karma is bound to inspire revolt. "Storm clouds have gathered," leaving a man to rue his mistakes. Go ahead and howl along as you drive your Volvo to work.

Where I Decline distance themselves from the sea of metal clones is in their cruising guitar buzz, most evident on tracks like Your Name In Blood and Face of Death. The fuzz is infectious and is gonna linger in your head for the better part of a decade. Grinding, chugging rhythms slug listeners in the gut, though the clean and penetrating vocals lift your chin and look you square in the eye. You're gonna be just fine.

Time to Shine is wounded, weary, but hellbent on hitting back and restoring a calm breeze that's long gone. These guys are marching home with bloody limbs, pushing tainted cars over cliffs, and riding the back of a lone hawk. The band's precision is expertly crafted where many find it audacious. Anthemic and unapologetic, Time to Shine is black-belted, teeth-clenching hope seeking a break in a gray existence. Given the political, economic, and social landscape lately smacking our senses, I Decline may the answer to lighting a candle rather than cursing our darkness.