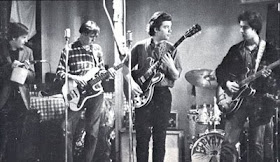 For this week’s Flashback Friday, we’re gonna go way back. The year was 1965 to be exact and the band was the 13th Floor Elevators, pioneers of the psychedelic rock scene that was only just beginning to blossom at that time. It all started in Austin, Texas where a college student named Tommy Hall began to expound upon his notion that a combination of music and mind altering drugs (most notably LSD) could assist in the exploration, expansion and evolution of the mind and spirit. Before long, through mutual friends and acquaintances, he was introduced to Stacy Sutherland (guitar), John Ike Walton (drums) and Benny Thurman (bass) who had already been playing music together in a band called The Lingsmen. The four joined together with Hall playing, of all things, an electric jug, and the only thing that was missing was a singer. Enter Roky Erickson.

At that time, Erickson was already honing his signature yelp as the frontman for another Austin based band called the Spades. Being fans of his vocal style, Tommy Hall and company immediately approached him about joining their new project. Alas, Erickson agreed and the 13th Floor Elevators were born. The name of the band was an obvious reference to the non-existent floor in most high-rise buildings and an allusion to altered perception.

By late 1966, the band had recorded a new version of the song “You’re Gonna Miss Me”, which had already been a local hit for the Spades, and it was released by International Artists Records. The song subsequently became a moderate nationwide hit, allowing the band to tour outside their native Texas for the first time and ultimately leading to an appearance on Dick Clark’s television show American Bandstand. In fact, the episode is probably best remembered for Erickson’s retort when asked by Clark, “Who’s the head of this band?”, to which he replied “We’re all heads, Dick”.

Later that same year, the 13th Floor Elevators re-entered the studio and famously (or infamously) recorded their debut album The Psychedelic Sounds of the 13th Floor Elevators while under the influence of LSD. The album combined Erickson’s howl with the philosophical leanings of Hall’s lyrics and eclectic (and thoroughly original) electric jug playing. It also featured an echoing, reverb-laced dual guitar attack courtesy of Erickson and Sutherland that was unheard of at that time. To say the 13th Floor Elevators were ahead of their time back in 1966 would be quite the understatement. And aside from the uniquely trippy music, the band’s debut would be remembered for another thing…its acid drenched liner notes, which openly advocated the drug induced mind expansion that the band themselves relied so heavily on when performing.

Touring for Psychedelic Sounds led to a lengthy visit to San Francisco, where the hippie movement was just getting underway. While there, the band spent time with an old friend and fellow Austin native, Janis Joplin, who is rumored to have mimicked Erickson’s vocal style in her own singing. The band also supposedly had a heavy influence on a couple of other San Fran legends during this period of time…namely, Jefferson Airplane and The Grateful Dead.

Finally, in 1967 the 13th Floor Elevators made their way back to Texas to record album number two…a mistake that would ultimately cost them dearly. During the recording process, the band’s rhythm section was completely overhauled as both Walton (drums) and Thurman (bass) had become increasingly frustrated by what they perceived as mismanagement of the band by International Artists Records. Their replacements were Danny Thomas on drums and Ronnie Leatherman on bass (Leatherman would subsequently leave later that same year to be replaced by Danny Galindo). But despite all of the turmoil, the Elevators managed to finish their second album, Easter Everywhere, and to this day, it is widely regarded as a psychedelic rock masterpiece. Unlike the debut however, the follow-up did not have a commercial breakthrough hit like “You’re Gonna Miss Me”.

Regardless, the band’s biggest misstep had nothing to do with their music, but rather the decision to bring their bohemian, counterculture lifestyle from the relatively safe, hippie-friendly confines of San Francisco back to their ultra-conservative (especially in those days) stomping grounds of Texas. Not long after recording Easter Everywhere, Erickson was arrested for possession of marijuana (this not being his first such offense). And at the ensuing trial, the singer plead not guilty by reason of insanity in an attempt to avoid a prison sentence, a strategy that ultimately landed him in a mental institution where he was reportedly subjected to shock treatments and psychoactive drugs.

In the midst of all this turmoil, the 13th Floor Elevators managed to record a third and final album titled Bull of the Woods prior to Erickson’s sentencing. Given the circumstances, it was primarily the work of Stacy Sutherland with very little input from the singer or from Tommy Hall. Regardless, it still featured the band’s meandering, fuzzed out, psychedelic sounds. The album was released in 1969 after the Elevators had officially disbanded due to the legal (and mental) issues surrounding their singer.

The epilogue to this story is a mixture of tragedy and redemption. In the aftermath of the band’s breakup, Stacy Sutherland also had run-ins with the law due to substance abuse issues, and in 1978 the guitarist was tragically shot and killed by his wife during a supposed domestic dispute. Erickson on the other hand, was released from the mental institution in 1973, but reports indicate he wasn’t quite the same person as the man who was admitted a few years earlier. Despite a notable period of seclusion, he eventually resurfaced in the 80’s and has maintained a steady succession of solo output since, including his most recent album True Love Cast Out All Evil in 2010. In addition, he has performed at a number of major music festivals in recent years including Coachella and South by Southwest. The other members of the band, including Tommy Hall, have kept relatively low profiles in terms of musical output.

It can be argued that the 13th Floor Elevators practically invented psychedelic rock. Listen closely and you can hear their influence in the fuzzed out jams and echo effects employed by bands like Queens of the Stone Age, The Black Angels and countless others. As always, I encourage you to take a listen for yourself. Go on…you just might see what mind exploration is really all about.