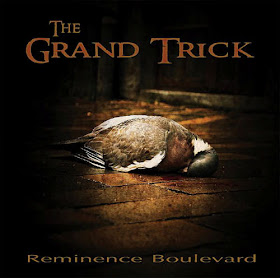 The term “Southern Rock” has often been used to describe the gritty and groovy blues based jams that were popularized in the 1970’s by bands like The Allman Brothers Band, Lynyrd Skynyrd and ZZ Top. The label was an obvious allusion to the fact that most of the bands responsible for developing that particular style were from the American South. Well…following that simple logic then, perhaps it makes the most sense that from now on, we change the name of the genre from “Southern Rock” to “Scandinavian Rock”. You see, the sheer number of bands coming out of Sweden and Norway, who are playing this sort of retro/classic rock style of music is astounding. And I’m not talking about nostalgia acts or cheesy tributes, these bands are kicking out some serious, grade A, funky ass, rawk n’ fucking roll!

The latest example is The Grand Trick from Linköping, Sweden. These five guys, vocalist Robert Cunningham, guitarist Stefan Johansson, keyboardist Magnus Nilsson, bassist Jonas Malmqvist and drummer Daniel Larsson, have just released an album that will have you searching for a headband and a pair of bell bottoms before you get to the end of the first track. Trust me on this. Reminence Boulevard pays homage to the arena rock of the 70’s in every way possible, from its bluesy swagger to the gritty vocals, right on down to that persistent organ.

Once you hit play and hear the opening riff and steady drum beat of “Hitman Blues”, it’ll take you all of ten seconds to know what you’re in for with this album. Cunningham’s gruff, raspy vocals seal the deal, making The Grand Trick sound something along the lines of Grand Funk Railroad if they were fronted by Lemmy Kilmeister. And check out the next track, where the complex interplay between the guitar and keys is followed by a harmonized chorus of “ooh…frequent flyer”, making the band sound like the evil twin of Steely Dan. I’m telling you, this shit is vintage my friends!

In subsequent tracks, like “Face in the Moon”, “Eraserhead” and “The River Queen”, you’ll hear contagiously catchy grooves overlaid by psychedelic keyboards that lend an atmospheric backdrop to the entire proceeding. In fact, I’d argue that if any one of those songs doesn’t have you tapping your foot and nodding your head along to the rhythm, then The Grand Trick is probably not your band. But my personal favorites from this collection are “Rollercoaster Ride” and “When is your Hell”, songs that exhibit that pure Southern…err…Scandinavian Rock sound. To be perfectly honest, if you played either of these tracks for me without telling me who I was listening to, I’d have thought I was hearing new music from Warren Haynes and the rest of the boys in Gov’t Mule.

Despite their name, The Grand Trick does not in fact have any tricks up their sleeves. They play it straight from the heart with their brand of good old-fashioned, blues based, boogie-woogie rock n roll and you’ll know that right away. With the warm months now in full swing, I suggest you consider Reminence Boulevard as the first summertime album of the year…the perfect groove for heading down the highway with your windows rolled, warm breeze in your face and your ears ringing like hell. Cuz that’s the way they do it in the American South…and dammit that’s the way they do it in Scandinavia too!