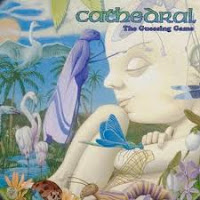 Ok now, this one was an oddity. The only things from Cathedral I have heard has been their first two or three albums, back when they were truly doom. Somewhere around their third album, The Carnival Bizarre, they changed styles into something else. I haven't heard past that change, having liked their doom style, and with no interest in the new, but after a decade and a half, I figure it's time to give it another try. The first thing I have to get across is that The Guessing Game comes off as two different albums, with styles to match. After listening to the album I realized it is a double disc release and that makes sense really, with the great range of styles heard here. The majority of the first disc is not doom, not stoner, not really classifiable. It is almost a simplistic, folky, heavy metal record. On almost every song it sounds like the singer is just talking the lyrics in a rhyming fashion; the music song to song is very disjointed, and the songs themselves are mixes of empty sounding music with vocals over-top or eclectic acoustic guitar and bass segments. If it was only this one album as a release I would have been very disappointed, with the songs (besides a handful) not really being what I would call 'musical.' Some of the songs are ok; "Painting in the Dark," and "Death of an Anarchist" are both listenable (if a bit long), with the song "Cats, Incense, Candles and Wine" being the stand-out. The interesting thing is, that as the release switches albums, so does the style of song. It goes from this almost-unexplainable rock into something more akin to classic Cathedral - doom. The second disc is almost entirely doom, with the occasional quick rocker thrown in for good measure. This is the disc you need to hear; most of the songs being damn good. As I said above, when I listened to The Guessing Game I did not originally know that there were two discs, and I was puzzled with this sudden shift. With the inclusion of a second 'story' (if you will), the full picture is easier to take in. While I wouldn't call this new album from the legendary Cathedral really great, it does hold some interesting points. I would suggest picking it up solely for the second disc, but you will need to hear the first - at least once - to understand what I mean; and honestly to hear something that treads the line between good and strange.