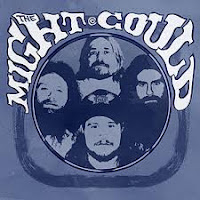 Whenever a great band breaks up, the members splinter off and create a plethora of really good follow-ups. Some of these off-shoots aren't as good as the original, others are par with it, and some exemplify the musicianship of the members of the original sound. The day that Alabama Thunderpussy broke up (about a month after I discovered them) was a sad day for stoner metal fans the world over. Sense then we've all been waiting, and wanting to hear what new project would be summoned from that corpse. A group with that much skill and potential could never go quietly into the night, there had to be more. That being said; from the ashes of Alabama Thunderpussy I present: The Might Could!

The Might Could's debut, self-titled, LP continues the general themes of Alabama Thunderpussy's music, it's gritty southern stoner, with a bit of gabled vocals - which took a bit for me to get used to - more akin to Fulton Hill then Open Fire. The songs are all groove-laden, heavily doom-influenced, and are guaranteed to melt your face. Of course amongst all this there is still a bit of tongue-in-cheek humor, especially in the song titles "The Night They Shoot Ol' Dixie Down," an obvious play off of The Band's "The Night They Drove Old Dixie Down," and the following "I Don't Even Like Pantera Anymore," I'd like to say there is a story about Pantera in there somewhere, but it's one of their more screamy songs, and they only lyrics I can make out are the title line in the chorus.
But the songs aren't all sludge-tinged stoner doom, there are some slower, more thought out songs. "When The Spirits Take Control" is a bluesy-jam track, with clean vocals and a soul. It stands out from the record as being so different, and quite honestly it is my favorite of the album. It is most akin to Alabama Thunderpussy's final album, Open Fire, and because that one was my favorite from the group, any song that The Might Could would record in that style will immediately be favored over the rest. It just follows my tastes well.

I have to admit that it did take me a few tracks to get into the swing of things with The Might Could, but once I did, this album really began to run for me. The songs are all pretty damn good, especially the second-half of the disc (I may have to re-listen to the first-half, now that I am used to the style). They do a version of down-and-dirty southern stoner that you don't hear without heavy sludge influence as well. With their debut album, the hints of sludge are there, but they aren't running rampant and overpowering the rest of the release. It's a tasteful mix of styles and genres that I think more bands should take into consideration. I really enjoyed hearing what The Might Could had to offer, and I will pick up their second release as soon as I am able, mark my words.
Official/MySpace
The Klepto at 12:00:00 PM
Share