Feast your eyes on that simple, beautiful album cover above. It's a bellwether for what is packaged inside. Los Angeles trio Aboleth have kicked off their career with a sweet three song 7" record simply titled EP-1, packed with explosive stoner rock magic that runs the gamut of tripping all the right triggers of outstanding stoner/desert/retro/blues rock.

The hard rocking trio include:

Baguitar? What the......? McCoy, stoner rock royalty from both Trash Titan and Ultra Electric Mega Galactic, has devised a new hybrid instrument that allows him to riff both ultra high and mega low. The sound of this beautiful invention is a runaway blitzkrieg thunder vortex, which McCoy unleashes from the jump on the first track, "No Good".

"No Good" is a tremendous introduction to Aboleth's sound as Joeright's skinskinning comes in alongside McCoy's baguitar monsoon licks to create a clean, athletic sound that stretches the boundaries of blues rock riffing. It pulls you in quickly with its brilliance before the door squeaks open for Roka's raspberry sweet and smoky bourbon vocals to ooze seamlessly into the mix, making a triumvirate of indigo crisp and mesmerizing stoner bliss. This song is raucous and well crafted, a whipsaw of thick multidimensional fuzz, a deluge of intriguing sound and melody.

Next up is "Corpsehunter", another onslaught of sound and craft, weaving melody with those unique baguitar riffs and Roka's pitch perfect vocals, vocals that simultaneously haunt and exhilarate. Closing out the thrill ride is "Captain Cheese", a nearly 7 minute psychedelic turn on a measured metal journey, impeccable in detail and nuance, and brilliant in deeply heartfelt exertion.

The sound Aboleth has crafted is simply exquisite. It's fine stoner/desert rock, but doesn't rest there on any laurels. The sound of the baguitar is equally exquisite, magnifying the energy and amplitude of standard fuzz riffage, which makes for a deeper than usual intrigue for the listener. Roka's vocals are unique. They contain both the sharp cutting edge of the finest of female vocals while tempering that keenness with an underlying ragged snarl that magnifies the appeal of the whole. And then there are the clean, clear, muscular rhythms of Joeright's drumwork, who manages to pull off the difficult task of making the underlying rhythm significant enough to be enjoyed without ever stepping on the magnificence of his cohorts' contributions. The three pillars upon which Aboleth are founded and upon which it stands are formidable in function, breathtaking in form, and a fantastically thrilling encounter.

Aboleth are in the studio cranking out their next wide spectrum stoner sojourn. Once this initial triple jam foray gets a bit of notoriety the anticipation for future releases will likely skyrocket. This first stage booster is powerful and magnificent and should pave the way for the explosive stages of future releases.

The pre order for the new Mothership has landed! 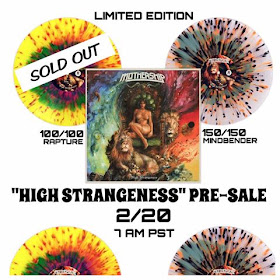 Mothership brings 8 new songs of ass shaking, beer downing, riff rippin' ditties.
Ride the Sun and Speed Dealer bring the uptempo boogie while songs like Midnight Express and Crown of Lies call on the heavy. It moves into a more thought provoking trance with Eternal Trip, which is a great song to reflect on life while staring at your black light posters thinking and honoring friends lost before letting life rip with some proper rock and roll right into Wise Man.
If you like straight up badass rock and roll with a party attitude, Mothership won't let you down!

Recorded and Mixed by Ryan Lee at Fire Station Studios In San Marcos TX and Mastered by none other then Rock Wizard Tony Reed of Mos Gen  at Heavy Head Studios in the Pacific Northwest.
Catch Mothership on tour and buy some vinyl!
https://soundcloud.com/actionmedia/mothership-crown-of-lies
http://www.mothershiphaslanded.com/
http://ripplemusic.bigcartel.com/artist/mothership
http://www.heavypsychsounds.com/shop.htm#HPS049 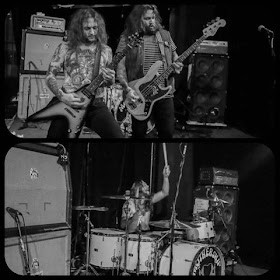 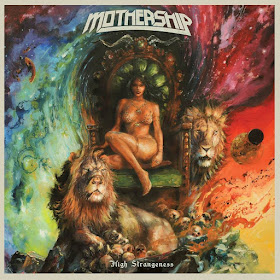 Everything about this Nuremberg, Germany band screams rock and fuckin' roll.

"Voodoo" is a nice little 3-song introduction to the band. I love all three songs. I'm guessing that a full album from these guys would be in the works, if not then one should be.

A big loud noisy 3 piece comprised of Tyler, Ryan and TJ who manage to dial in everything from screaming vocals and seriously heavy guitars and drums to softer quiet melodies which crescendo back into the loud.
I hear a lot of bands I was really into in the 90's and early 2000's in these songs, think somewhere between Deftones, Helmet and At the Drive in, which is right up my alley.
The musical world seems to always circle around and Ghastly Sound could've fit perfectly on the mainstage of Ozzfest cira 2001 and they will also fit perfectly on stages here in 2017. You can pick up these 4 gems on digital download in March and hopefully they'll have enough to put out a full length soon. They've just recently hooked up with Magnetic Eye Records so I imagine or hoping some sweet vinyl will be coming in the not so distant future.
1. The Worst
2. Where the ghosts hide
3. Cape Buffalo
4.Cuttlefish 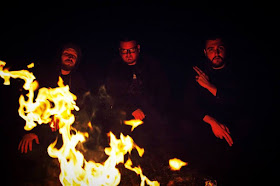 New Band To Burn One To-Lowcaster

Well, it's been quite a while since I have done any sort of review for the site. So, I felt today would be a great day to shake off the rust. Yesterday, I was perusing through thee old Bandcamp app and came across a band called Lowcaster. What drew me to the band was the album artwork, which is something that usually does. Without knowing where the band was from, I detected elements of doom, sludge and thrash. I was surprised to learn that the band was from San Francisco, CA. And based on the logo, I thought there might have been some black metal elements as well. Turns out I was wrong. But, one thing is for damn sure, this band is HEAVY! The opening song "Blood Moon" starts off with a southern sludge feel, a la C.O.C. but "The Vapor Sea" is much more than that. The album is a vastitude of kick ass dual guitar shredding, chest-crushing heaviness (the riff on "Dirty War" is enormous, whew!), a hardcore punk attitude, and fist-pumping heavy metal anthems. Awesome stuff!

Ever since catching these guys headline at the Cluny venue in Newcastle-Upon-Tyne, England, towards the end of last year, we’ve been waiting for this record to drop, and by god how mightily it crashes to earth; psychedelic stoner riffs, earthly pounding drums, and vocals at their rawest, Feed The Rats is a hell of a statement from Pigs Pigs Pigs Pigs Pigs Pigs Pigs that we’ve had on repeat for a good month now (hence the delayed review).

Pigs(x7) are a band containing members of other North Eastern England bands such as the fantastic Blown Out, Ommadon, and Khunnt, and the musical dexterity is expressed vividly on opening track ‘Psychopomp’, a 15 minute headfuck of thrusting riffs and psychedelic nuances that keep you gripped to the songs’ core base of being a heavy-ass rock song. The pace never falters, dips, or stops for a breather as the drums pound from the first note to last, the guitar riffs are heavy and dream like, while the vocals of Matthew Baty constantly toe the line between a man possessed and about to lose his voice, to sheer anger.

After the mammoth opener, the band create the “normal” length ‘Sweet Relief’ which is pure heavy stoner majesty. Same pounding drums, heavy riffs, agonising vocals, condensed under five minutes, you know it’s a monstrous song when it tightens its grip on your windpipe until you start turning blue. Feed the Rats is only three tracks long, but with the 1st and 3rd tracks hitting over 30 minutes combined, it’s a fair amount, especially when the colossus of ‘Icon’ begins to slay away at your speakers, what little energy remains in you quickly gets burned up in the smoke haze filled waves of purple and green that spin towards you with every word and riff Pigs(x7) layer on top of the last.

(Oh, and that's some sweet ass artwork too! The vinyl comes as a die-cut and the coloured insert is inter-changeable with the figure on the front)

Anybody like theoretical physics?  The fuzzy world of quantum mechanics?

Holy Mount, a four piece from Canada lay down 7 psyched out tracks of the kind of stuff I would imagine the likes of Einstein, Feynman, Dirac, and Heisenberg listening to if they had it available in their day.  Blasting in their labs, while sitting and pondering the meaning of life and the inner workings of the world.  Heavy ass fuzzed out spacey riffs providing the soundtrack for insights into the universe.

Add trippy layer onto trippy layer, mix with just the right amount of heavy, stir, and "The Drought" will take you on a fabric of space time bending journey that would make Einstein proud...  No matter which parallel universe you are reading this in.

Well, if you were to get technical, Heavy Planet actually started in 1999 while I was working for National Record Mart. I wanted to start a website that would feature new bands that no one ever heard before and needed an outlet to do that, so I started an Angelfire page and the rest is history. It was very short lived and was basically anything heavy metal. Back in March of 2007 I was kicking around the idea of a much bigger and better website and decided to revive the old and outdated format keeping the same idea and focus in mind. Unfortunately, I somehow lost all of my posts from 2007, but decided to truck on. I always loved bands like Kyuss, Fu Manchu and Monster Magnet and wanted to give bands like them more of the exposure they deserved. So, on February 5, 2008, Heavy Planet relaunched as a Stoner Rock blog. I am proud of our accomplishments thus far and can't thank enough the writers that have come and gone and shared their passion and sacrificed their time for the cause. Thanks so much for your dedication and support. Rest assured we will be here for another year to infest your minds with the best music on the planet. Stay heavy my friends!
RegR at 9:59:00 AM 4 comments:
Share

There are album cover artists out there in HeavyPlanet land that crank out beautiful covers for a myriad of Doom and Stoner metal bands and musicians, but one such artist, Alex von Wieding, none more abundantly known, finds the time in between wielding his incredible digital paintbrush to also lay down deep, dank ethereal delights of stoner blues tunes as well, in the guise of Larman Clamor, the moniker of this one man atmospheric blues fuzz machine.

The latest release by Larman Clamor, Beyonder, continues the artist's prolific trend of oozing smoggy blues riffs that slowly sheath the listener in thick tribal chords of indigo smoke, evoking the aroma of old leather and aged whiskey, and smoothly transporting you to a realm of peace and comfort, like old denim and well-worn cowhide.

Beyonder is chock full of 14 separate portals of smoldering warmth where von Wieding demonstrates his mastery of melody and one man band execution. The twangy fuzz rife on every track are time machine riffs of instant primal enrapture, a decadent drink of aged liquor, and the ensuing envelopment of insulated warmth.

This album is a skillful rendition of emotional analgesic, something to warm your bones while you work, relax, or play, a cushion against rigors and demons alike.