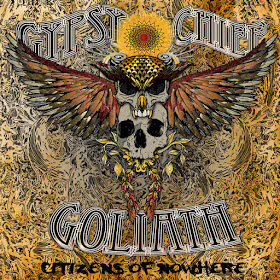 GCG casts a shadow over all that is heavy like a lumbering giant by forging a thunderous sound dark swamp infused sludgy riffs. Their unforgiving work ethic allows their scorching hunger to promote their debut album and their explosive sophomore record New Machines of the Night on the road making them Canada's premiere stoner rock act. Mia Tyler, daughter of legendary Aerosmith lead singer Steven Tyler, described GCG by saying, "This could seriously be your favorite band ever."

When the band unleashed their sonic sorcery on their newest album New Machines of the Night, the record revealed that they elevated their sound to daring new heights that the dark depth of their sound. Lead vocalist Al "the Yeti" Bones refined his barbaric vocal attack by combining his vivid lyrics, ferocious delivery and pulverizing guitar to create a voracious performance in the studio and on stage.

"Gypsy" Dave Ljubanovich plays his guitar like a blacksmith smacks an anvil; with devastating precision and primal strength, that creates diabolic dynamics with Al or soaring over top the band with his fiery leads. Adam Saitti intertwines his pummeling percussion with the slithering bass lines of Darren Brush alongside Steve Dugal rhythm guitar to forge an enduring musical foundation that provides the framework for the band to create their signature sonic atmosphere in every song.

For those that think the spirit of the blues is a relic of the past, GCG's very on Reverend Brodie Stevenson resurrects the bands' enduring love of the genre that's shaped their sound and influenced their musical heroes in order to bring the harmonica by integrating it with modern metal. Brodie adds a distinguished layer of soulful synergy to the band that honors their love of the blues legends that came before them while giving their sound a distinct flavor.

The combustible musical alchemy of the band is comprised of the individual flare and undisputed style of every member, but when they are brought together they create an unforgiving musical force of nature. By creating a sound that pays homage to their influences while pushing themselves to edge of their creative limits collectively, the band creates an original sound that distinguishes itself from the ocean of other metal bands out there.

Their single "Black Samurai" reached #15 on iTunes Canada, which got into rotation on over 200 radio stations across North America including slots on prestigious stations like Direct TV & Sirius Satelite Radio. Revolver Magazine New Machines of the Night to #4 in their Readers Poll for "Album of the Week" which beat out Stone Temple Pilots.

The album held the #15 spot on the North American CMJ Loud Rock Charts for six weeks straight & peaked at #2 on the Earshot Loud charts for three weeks in a row. Canadian Musician Magazine showcased GCG with a feature article & Exclaim! Magazine listed them as "one band to watch out for" in 2014.

Their lethal live performance allowed them to share the stage with some of the most prolific acts in stoner rock and heavy metal, solidifying their honored place in the pantheon of greatness within the genre. Gypsy Chief Goliath

has toured with influential underground titans Corrosion of Conformity

, Foxy Shazam & Every Time I Die among others. Prepare yourself for a musical beast of an entirely new breed when you encounter the colossal roar of Gypsy Chief Goliath.
Band Members:
Al 'Yeti' Bones
Darren Brush
Adam Saitti
Links: Album Stream | Website | Facebook
RegR at 2:00:00 AM
Share