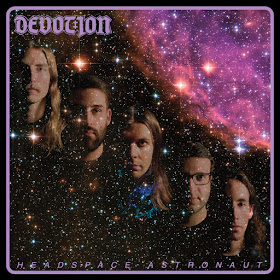 Band Name: Devotion
Genre: Heavy Rock
Location: Seattle, WA, USA
Brief Bio/Description: In the fall of 2008 a ten song LP entitled Bastard Son Of Affluence Blues was recorded with Jesse Gander at The Hive Creative Labs in Burnaby, British Columbia and released the following year on Rivalry Records. Recorded as a project between only two musicians, upon release of the album a full lineup was assembled and live performances ensued. After touring the West Coast of the United States extensively as well as a cross country full American tour and a many shows in Canada the band began work on the follow-up album to Bastard Son Of Affluence Blues. The recording and mixing process stretched across many sessions in multiple studios throughout 2012 and 2013. However, after the album was complete all went quiet from the Devotion camp and many wondered if the new album would ever see the light of day. Finally, after years of delays, the second Devotion album was made public in April of 2016. The new record, Headspace Astronaut, is a massive collection of music, clocking in at nearly an hour long, and it finds the band fully embracing the heavy rock sound that was hinted at on the debut album.
Band Members:
Mark Palm
Aaron O'Neil
Sean Meyer
Bob Reed
Adam Vernick
Links: Bandcamp | YouTube | Facebook