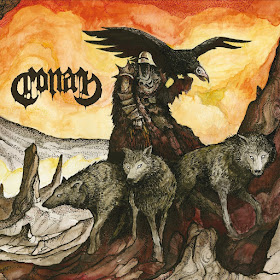 There are few bands who have the power and craft to redefine your preconceptions of what it is to be HEAVY. There's only one band who've caused Matt Pike (Sleep

) to need to take a shit after watching them. That band is Conan.

e' (out now on Napalm Records), Conan - a deadly trio of bass, guitar, drums - again demonstrate their ability to write riff after relentless riff that pounds you into submission.

, as well as Conan of course.

For the unfamiliar, Conan's sound is doom-inspired gargantuan down-tuned (to drop F) riffs, interspersed with warrior battle-cry vocals, with plenty of feedback thrown in. It's a potent cocktail and one the band have perfected over three records. It's dense. It's intense.

As their name suggests, Conan seek inspiration from Norse mythology, folklore and fantasy, battle-axes and spears. Track titles like ‘Throne of Fire’, ‘Wrath Gauntlet’ and ‘Earthenguard’ are a case in point. Yet this is never tongue-in-cheek. These guys mean it and deliver monolithic riffs one after another like a repeating tsunami-like wave. The album’s closer ’Earthenguard' - clocking in just shy of 12 minutes - captivates the mood of the whole record. Dark. Brooding. Epic.

Thumbs up also need to go to the production. It's not easy to condense the sheer weight of noise coming from these amps, and maintain their impact. But Davis and Fielding have done a great job here. Revengeance has to be listened to on quality headphones or hi-fi speakers to fully appreciate the sheer weight of this record.

Since their demo EP in 2007, the band have released two EPs, a masterful split with Chicago's Bongripper

, two live albums (including their 2012 Roadburn set) and three LPs, and have shared stages with the likes of Neurosis

to name a few. Conan are about to embark on a US tour with Serial Hawk

, and have lined up a string of festival performances in Europe, including Desertfest and Xtreme Fest.

Quietly going about their business, Conan have built a name for themselves in the UK’s doom underground scene. And with Revengeance they peer into the horizon deciding whom and what to conquer next.