LP Review: The Magic Low Transmitter by Far Away Town 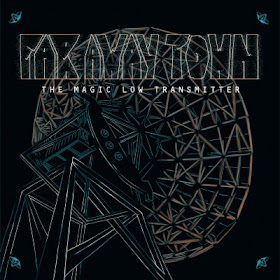 After a series of Eps, Austrian three-piece Far Away Town have laid bare all of their rawest offerings on their debut full length record The Magic Low Transmitter, and it’s just what the desert stoner fuzz rock aficionado in you wants to hear. Lots of thick heavy distorted riffs, repeatedly pounding your gut into the sandy Palm Springs future.

Guitarist and vocalist Alex starts things gutturally with album opener ‘Baroon’ stomping it’s riff laden foot print all over your worn-out back. The track builds and crashes with aplomb intertwined with softer and sharper vocals echoing ghost-like across the fuzzed out riffs. The band adopt a fuzz sound which does not overpower the rest of the band, but instead works at a naturally aggressive edge which allows the drums to pulverise on their own standing, and the vocals to blend into the band’s sound as opposed to be lost within. This is stoner fuzz that will dominate when played live!

As the record progresses through the powerful ‘Commander (Max P.)’, the quite beautifully heavy layered instrumental ‘Come On, Come On’, and, well, every other track of distorted bass-laden riffage, the Austrians become a powerful figurehead in the stoner world, with an intent to completely wear your headbanging skills out, combining riff with riff, overlaying heavier fuzzy sounds, and once again, the riffs. Far Away Town have created an awesome record for lovers of everything heavy, it’s no wonder that these guys have toured with Brant Bjork and Truckfighters in the past. Go check this out now!