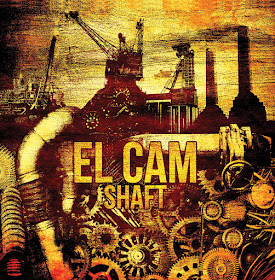 Hailing from the Nord-Pas-de-Calais region of France, this Karma To Burn loving duo have gone full throttle on their second release, Shaft, following 2013’s Orchard, rammed with razor sharp riffs, doused in fuzzed out tones to entice the lovers of the heavy, and lovers of the melodic, these French instrumentalists have created a record which is worth your attention.

Being a duo is no longer a gimmick, and when the noise created by the two people is as loud and as full as these guys, you can never tell that the band are lacking any other instrumentation, and that is a testament to how good a musicians Mat (Drums) and Jey (Guitar) are (plus the record was recorded live). Comparisons will be rife with Karma To Burn (as I’ve already done) because they’re an instrumental stoner band, but the key to El Cam is in the way that they execute their songs, instead of slightly drawn out numbers that take a while to get going, these guys go straight for the kill. The record opens with the fuzz loving ‘Life in The Ruts’ with its downturned guitar riffing slicing you from top to bottom, then ‘Red Guts’ builds up momentum before an almighty devastating implosion of guitar riffs crushes your face with a joyous grin, and ‘Reeks of Firedamp’ has a devastating effect on your already shattered body, and we’re only onto track three!

The rest of the record continues at the gloriously energetic pace that the duo have set from the start, with each of the six songs on show hiding huge riffs hidden behind other riffs, and song structures that keep you following the story of the song, to ride its flow, and that’s what all good instrumental music should do, not to  alienate, bore, or work as background music, El Cam demand that you pay attention to each and every riff, like it was a sermon from the Gods themselves.