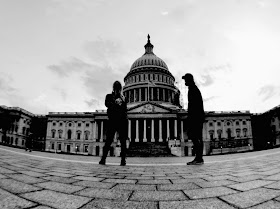 So that walk home really sucked. I'm not terribly fond of interacting with law enforcement, so those flashing lights interrupting my route evoked that fight-or-flight retort. Fuck it. I'll take the long way home. And fuck them.

Oh, these new Jucifer sounds... It's not only unfair to scream "departure," it's also categorically inaccurate. The ever-ambulant duo have never allowed particular descriptors to stick, so calling their nine-track thrasher District of Dystopia a change of pace isn't fair. But it also doesn't fit their sticky-flogged mold of gigantic, expansive noise-doom. The largest head-turn here results not from the sound, but from the message. The duo would roll over in their roving bunks if they knew you'd given a listen and failed on realizing the larger fucking point. Turns out they care less about amped cabinets and more about what's just.

From the quickly disjointed onset of Non Gratum Anus Rodentum through the blackened grindcrust of the swamp-ridden The Object of Power, Jucifer exercise a legislative muckrake from the bottom up. A soldier's misfortune, though partly pinned on his own poor judgment, also points to higher powers recruiting, promising, lying, and never giving a single fuck about the boys in queue. With honesty comes pain, and the band's brutal, scabby pace sets sights on capturing lo-fi consciousness with the hope that this audience digs deeper and pays attention to more than rattling speakers. More than metal, this is rebellion.

Quick, low-slung filth immediately puts light years between these sounds and the droning marriage of metropolitan doubt and teen angst lacing their previous work. It's as if these two intentionally gave a fistfuck to production and hope these runes get marquee billing. Utilizing no shortage of fuzz and Edgar Livengood's intermittent but never absent drummed violence, stop-start chops form swarms of hornets that encase the senses. Sure, the fur gets as saturated as you'd expect. But we're in trouble... When Jucifer pull a burlap sack over our heads and a breaching hammer makes its blows, we know this flaming gaze has a purpose. More importantly, though, it has a heartbeat.

Gazelle Valentine's vocal remains, at times, breathy as you'd expect. But these wheels come off quick, essentially gnawing with an overt aggression directed at D.C.'s representatives. The unrelenting spite is wholly infectious, so perhaps the duo's objective remains more clear and accessible than the sounds. Oh, you weren't expecting this? Did you hear Jucifer's LAST release?! The shifted tempos hide the lyrical depth, but there's a LOT to absorb here. And that this couple finds its mark in well-under thirty minutes is their exercise in hazy, shrouded brilliance.

District Of Dystopia will remind you of those demos your buddy handed you in ninth grade. More raw than the sound, though, is the sense that something's not right. Jucifer take that sense, smack it sober, and shove it in your face. It's revved and uncompromised, devoid of restraint and any second guess. Don't bother getting uncomfortable when your uncle brings up political incompetence as you're chewing Virginia Christmas fat. For those with any virtue, this album is little more than an adjunct argument. For the uninitiated, this sludge-thrash exercise is Insurgency 101. It's also one of 2014's most compelling releases, front to back.