LP Review: 'The Return of the Bearded Brethren' by Grifter 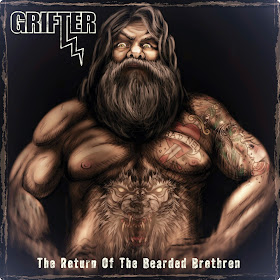 We might be a little late to the game with this one, but there was no way we could let this album slip by without a few words. Heavy Planet loves Grifter! It’s easy to see why really; strip everything down to the basics, and what you have is three guys playing the grooviest stoner rock that you can’t stop getting down and dirty to, and they’ve been doing it since their debut EP High Unholy Mighty Rollin’ back in ’08, followed by the even more exceptional The Simplicity of the Riff is Key record two years later. Grifter are consistent in their heavy groovy stonerness, and on their second full-length, they excel!

Songs about women, rocking and drinking (‘Black Gold’ an ode to Guinness) are the spinal cord for Grifter’s blueprint, grooving their way through ten tracks of good-time rock’n’roll, with a combination of face-busting riffs and mellowed out vocal licks. You can’t argue against the band’s songwriting ability, they’re not just about being the loudest and hardest they can be, but in tracks such as ‘Bow Down To The Monkey’ or the ridiculously infectious ‘It’s Not Me It’s You’  you can see the band’s hard-working scales and layered instrumentation, it’s never overcomplicated, and it’s the bare-boned rawness of their songs and grooves that they nail perfectly.

The closing addition of Sabbath’s ‘Fairies Wear Boots’ sums up the album’s echoing similarities with the band playing a gig in their local town, everyone full of beer, jumping around the room, singing along in unison, having one massive night of loud, groovy, good-time rock, where nothing matters but the music, the place you’re in with your fellow man, your brethren, hugs, fist pumps, head-bangs, living all for the moment, being united..... and that’s why we love Grifter!