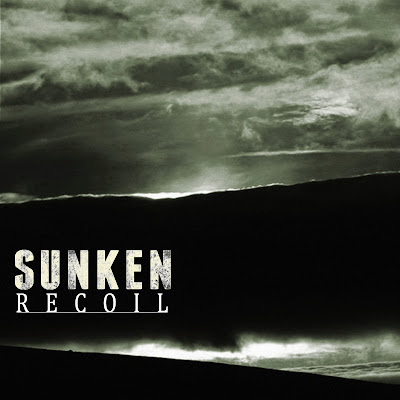 Eleven months ago, I lamented "We only get five tracks, guys?" after submerging myself in Sunken's hypnotic, swollen demo. It was, of course, entirely complimentary, as those five songs collectively imposed a residual thickness that's still protecting my skull from lesser, boring releases sent my way. Sunken seamlessly hover, cool off, hit pause, and ultimately explode with more power than any two-piece has a right to. But what another bass/drum duo might reveal as weakness only serves as Sunken's spooky, chest-caving catalyst.

These Belgians lugged those swollen tracks and squeezed four more just behind them, wasting not an inch of air space and filling a sonic void that, again, we never knew existed. Thirty minutes expand and improve on the litany of the band's accomplishments, teetering between wholly encompassing and distantly foreboding. On Recoil, Sunken have found their static-sludge stride, slowly rolling out elements both adjacent and obtuse.

The new sounds are bookended by two massive nine-minute haunts that perfectly define their sound and their dynamic. On Sunken, the slow swell of A.'s smooth bass returns, graduating to a crashing storm of static. J.'s drums encircle with cool progression as rhythms worm and poke around corners. The marriage of drum and bass finds Sunken nailing their mark here, with low thumbings taking the lead only to withdraw as the burn deepens. The devastation here is subtle, dealt slowly and even calmly. Amid the haunt, however, is a gorgeous, flattened scene.

Damaged is immediately loose and abrupt, juxtaposing what we've just tread. Stop-start noise is chaotic, attributed to stringy, buoyant bass that breaks for stomping statements. You'll detect a nod toward space, approaching a shipyard on a foggy fadeout. So the transition to Downwards is a smooth one, a midnight stroll that's deceptive and captivating. A. guides our steps, but J. never trails by much. We're pulled blindly into alleys and can't seem to commit to one route, dodging the gradual approach of danger. When paces lift, a blanket of fuzz descends and a strong, ever-increasing groove offers no escape. Our vessels begin to pop.

Perhaps everything has led to the closing title track, offering trademarks and undaunted patience. The patches of enormity drizzled over long, numbing stretches are certainly highlights, but simply MASSIVE doom crashes emerge at the midpoint. The denouement buzzes and swarms upon itself, staying true to form but huffing in a whole new level of buzz. The crashes craft an incredible burn, and these final moments make for a sticky experience.

Sunken's great triumph is their lack of predictability. Listening to Recoil, I can't pinpoint where the sounds are headed, whether I'll be crushed by the weight or lifted from the soil. There's much to sift through, and the largest compliment I can give this release is that it'll require multiple spins. One bass. One drum. Hell, you won't even notice there's no vocal. Each progression is a statement, each shift is another nervous tick you've now developed. The deeper you go, the more you want. Junkie.