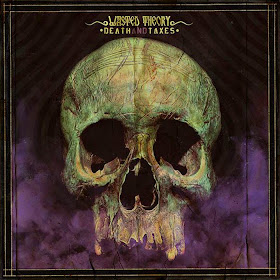 Listen up…I DO NOT speak for my fellow Heavy Planet brethren when I say this…but there are times when I get tired of all the post-this, proto-that, 25-minute bullshit songs that get passed off as "epic" nowadays.  I realize I'm probably very much in the minority on this within our little community, but sometimes God dammit…I just wanna ROCK!  Now if you can dig on that, then I suggest very strongly you get yourself someplace devoid of assholes and buzz-kills, set your speakers to LOUD, and give the latest from Delaware's Wasted Theory a go.

From the blazing first riff of album opener "Dead is Dead" to the final strains of "Black Widow Liquor Run," Death and Taxes is an album chock-full of shit kicking groove and dirty, Southern swagger.  Guaranteed, you'll be wrecking your neck to the bouncy stop/start rhythm from vocalist/guitarist Larry Jackson Jr as he strains his whiskey drenched pipes with "I wanna get high…high as the sun…up in the sky" during "Hellfire Ritual."  And kudos to bassist Jonathan Charles for being able to keep up with drummer Brendan Burns, who by my estimation, is one of the hardest hitting skinsmen on the circuit today.  Don't believe me?  Check out the thunderous pummel of "Tire Iron (The Stone Giant)" and prepare to board up the windows.

Now I don't know if it has anything to do with the addition of new guitarist Dave McMahon, or if the band has simply gelled since 2013's Godspeed, but the musical growth and improvement in songwriting from that release to this one are notably substantial to my ears.  Of course this isn't surprising since I made a similar observation about Wasted Theory in my recap of their live performance at this year's Moving the Earth Festival (HERE).  The band's maturation is evident throughout the eight tracks found on Death and Taxes, from the dare-I-say catchy riff of "Hexes" to the feedback drenched, slow build of "Celestial Voodoo Lounge."  Or check out the stoner stomp of "Absinthe Queen," which culminates in a badass, bluesy guitar solo that'll leave you simply nodding your head in approval.

If you'd rather sample before diving in head first, start with the aforementioned "Hellfire Ritual" and then check out "Black Widow Liquor Run."  Both tracks showcase the band's heaviness by way of their dual guitars, rock solid rhythm section, and some seriously deviant lyrical content (which I understand comes courtesy of Burns).  Here's a little snippet..."the devil's watching every move that I make…I'm spittin' fire like a mountain of snakes."

The bottom line is this…life is short and as the album title implies, there are really only two certainties.  So when you're burned out from wasting precious time on tunes that are long winded, meandering, and tedious, throw on some Wasted Theory and get down to brass tacks, musically speaking.  Because you know…sometimes it's okay to just want to rock.