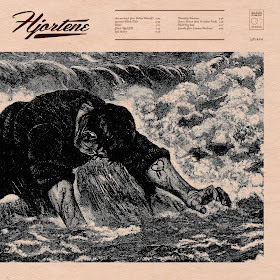 Ahh genre labels, where would we be without them? What better ways are there to not just include bands into your listening circles by labelling them under the same genre or sub-genre as your listening tastes, but also to exclude any bands from ever giving them a listen? It seems a long time ago when there were merely just pop/rock categories down your local music store, now everything has its own sub-sub-sub-grouping, just to narrow your tastes down even further. And just when you thought there were no more categories to explore, we are given stoner-punk!

None of the genre ranting has anything to do with Denmark’s finest purveyors of “stoner-punk” music however, and it’d be a shame to take the attention away from the music, as their self-titled record is pretty special. Hjortene  opens with ‘180,000 km/t’, a blistering three minute blast of punk rock fury, with vocals from Valiant Thorr’s Valiant Himself. Where the overtly punk aesthetic is clearly there, the attitude is layered with thick and fast stoner riffs which make the band standout as genre groundbreakers. It’s a sound which carries a nuance of surprise as you never can settle with the sound, not knowing if the angry punk or the soothing stoner is going to berate you next. Palle Hjort’s vocals throw the band back straight into stoner territory with ‘Igennem Hárde Tider’, a slightly subdued voice guiding the guitars into their layers of pulverising riffs.

Singing in their national tongue doesn’t affect the sound of the band to those not fluent in Danish, as the lyrics become simply another instrument to rock your fists to. Whether it’s the grooves of ‘Classic Rock FM’ or the instrumental onslaught of ‘Epic Indian’, Hjortene is a record which dresses to impress with thick waves of heavy riffage matched by a youthful urgency many try to imitate, but few address naturally. A track such as ‘James Brown’ featuring vocals from fellow Danish punk band President Fetch, sung in English, is like a wake up call to those stagnant bands on the stoner scene, to basically get there shit together and step up their game.

Forget everything. Forget labels, forget what you think you know about a sound, a genre, a style, a foreign language. Hjortene is a record which needs to be explored and divulged into completely (and with the other band members going under the names of Claus Doomhammer Hjort, and Kim of Death Hjort, how can you possibly not get on board this?).