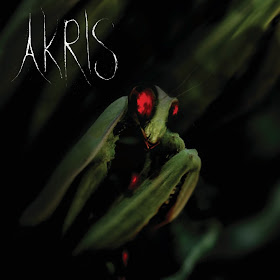 If you're gonna have your heart carved and lifted from your ribcage, you'd prefer a sharp tool and a swift hand. Get it over with, sweetheart. Rip me open from groin to sternum, but please knock me out first. I can take a glance through photo albums and rub a dozen raised scars left by girls who never intended for things to get so messy. Had they cut me quickly and dropped the smile, perhaps recovery could've been manageable.

Straight out of a mossy grove by way of Virginia rises Helena Goldberg and her psychedelic sludge-n-bass duo Akris. On their self-titled, full-length debut, Goldberg and now-departed kit-killer Sam Lohman offer a permeating ache that slowly and steadily hums between the legs and haws with deliciously punctuated buzz. Hypnotic and painful, Goldberg's vocal might be the haunt your Friday night thought it missed. Careful, though... it's gonna make your Sunday morning sting like hell.

Subterranean, dragging dirge hardly sounds like it'd pair well with sultry assertions. The sludge rhythms lay down chugs and paces shift, but lo-fi buzz clutches madness and crafts a heady haze that feels too good in your belly to recognize the approaching blows. Sticky, psychedelic clamor balances the thickness on what could be called a clinic of melding elements. When this siren's witchy warp parts the choppy waters, good luck righting your ship.

I wanna focus on the psychedelic sludge, I really do. The flatlined bass-belch grinds on knobby cruisers like Profit and Row Of Lights. Gutteral and emotional, Akris blend groove and haze with skull-rattling spite. Embers crackle on Part Of Me, appearing at your feet and sinking before your eyes. And Redeemer sticks like hot glue and burns like hell, lifting and grooving merely a hair after a signature drone-drift. Goldberg's bark grabs you by the wrist and drags you across the playground. Your friends are watching, but what the hell can you do?

A swampy swim can only take a band so far, though. Akris have already shed comparisons to their contemporaries, but Goldberg's gorgeous layered vocal delivers tiers of pain you hadn't considered. Hell hath no fury like a woman scorched, and listeners are wholly enticed on Riverbed. The slow bounce numbs and stuns until you invite the vocal through your front door. You'll never get your hands on it, though. Smoky as spirits and twice as fleeting, the emerging memories of Vomit Within crawl into the dark corners of your mind and roll out a weathered cot. The track warps out, spreads, and begins to settle. Now you've done it.

The album's thickest sludge and Goldberg's vocal ache marry perfectly on Suffocate. Despite its density and behind her timbered hiss you'll find a cruel duality. She adores you, she claims. But at the same time she's got no problem with embarrassing the hell out of you in public. Before we can descend toward blackened gates, we've gotta relive gym class embarrassment at the hands of an honest love note gone public. Fuck, just let me take a concrete brick to the nose and send me home, will ya?

Akris won't let you off the hook. Funny enough, it's the burning sludge that gently tugs at your guard, ultimately extracting a gently-barbed string of trust. Psychedelia teems amid the chaotic swarms, but the web of slow and viscous atmospheres serves as the band's facade. The slow, silent killer is Goldberg's lurid melody. A voluptuous counter to the burns and scrapes, she's drawing us closer and extending the anguish. Look away, take a walk, and forget what you know. But you're not fooling anyone. You know you'll be back. Trouble is, so does Akris. 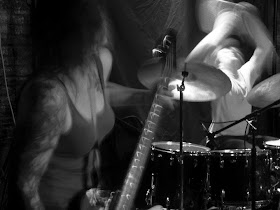