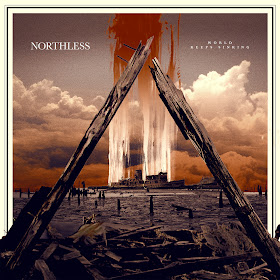 I woke up enjoying a bowl o' crow this morning. Actually, this foot in my mouth has its origins around August 1st, when I had trouble deciding which of four Chicago shows I'd be attending. After spending months complaining that the scene in the Midwest was pale and elusive compared to other corners of the country, here were four of my favorite bands playing the same fucking city on the same fucking night. Three weeks later and here we are in the second of consecutive features on Milwaukee's finest sludge thickness.

Any of these fifty-nine minutes could attest we're watching a world deteriorate. From the slow lumber of Last of Your Kind to the title track's abrupt chaos, we're dragged through reality by a heaving beast riddled with arrows. Rhythm shifts and jarring blasts are just one facet. Tolerance is long forgotten and intensity permeates even the album's restrained passages. Slow crunches of doom direct us, but the destination isn't likely one we'll want to discover.

Kuru is a lurk of grinding static that gasps between riffs and sways like a drunken giant. Imagine driving iron fists into thick earth on a reach for hell, only to discover something even darker. The EYEHATEGOD abrasion is packaged in sandpaper and tied together by John Gleisner's dizzying drumwork. We've already begun unraveling, but Northless here begin to deconstruct, spitting and shitting on a stumble of absolutely gargantuan volume. In fact, not a note on the disc reaches justice when you plan to respect your neighbors. Listen loud, please.

The molasses underlayment finds its truest form of filth-based sludge metal on Communion, an eleven-minute slab of shifts that stays low and dirty as it pulls off its blinders and cuts away fake smiles. The gorgeously erratic atmospheres arrive and depart in every direction before breaking into a somber lakeside reflection that fades like the sun. This highlight bridges into Passage, an even longer epic of echoed memories and slow-drawn post-metal elements. Fifteen-plus minutes of surges and pullbacks threaded with Jerry Hauppa's loose low-end is completely exhausting and completely fucking awesome. If World Keeps Sinking still had a working heart, this would be it.

The disc's back end provides some straight-forward sludge dejection on Wither and Escape, a quick roll through steaming bogs. Erik Stenglein's vocal here is a tad more accessible than on the previous tracks, but that's hardly a comfort. This guy's pipes are to-the-point and wait until the song's final bark to flatten your chest. Leading directly into the shaky Returnless, this collection closes on blackened doom and collapsing villages. Rising and falling rhythms marry Stenglein's encircling throat-cloak to assure us there's no looking back. Warbled and murky, the chug-fade at the album's end is less death rattle and more slow snuff. Shudder.

You may not like the message, but you needed to hear this. I'm sorry, son. Your future is broken. Northless stamp our minds with the realization that we fucked up. World Keeps Sinking is an expansive, itchy shuffle that'll leave you scratching at your skin, twitching on yesterday's promises that never emerged. The muddled, nebulous rhythms perfectly ensnare the falling hope, while ambitious guitars are perfectly snatched mid-air and snapped on complacency's knee. It all paints a pretty bleak landscape. And it all sounds heavier than hell-on-earth.