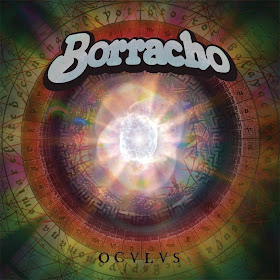 It's no secret that we're big fans of Borracho's heavy riffs and stoner grooves here at Heavy Planet. Hell, we asked the guys to headline our CMJ Showcase in New York City last Fall and we're thrilled to be sponsoring their upcoming album release party at the Rock and Roll Hotel in Washington DC (that's next Friday, July 19th by the way). But perhaps most exciting of all, we're pleased as fucking punch to be offering you the very first taste of the band's new LP, Oculus…right here…right now. Yep, you read that right, the Borracho camp were kind enough to give Heavy Planet readers the exclusive opportunity to hear their new record in its entirety a full week in advance of its release. So settle in, hit play and come trip out with us as we get acquainted with what is sure to be the soundtrack to the rest of your summer. This is Oculus.

Now I'd be remiss if I didn't mention the underlying theme that seems to be infused into every aspect of this release, and that would be one of "addition through subtraction." Don't get me wrong, I mean no disrespect to original vocalist Noah Greenburg, who was excellent on the band's debut album Splitting Sky (and even better if you saw him live), but this marks the official debut of the band's leaner, meaner three-piece lineup that sees guitarist Steve Fisher stepping to the forefront, grabbing the reins so to speak, and taking Noah’s place behind the mic. So there's that.

But then there's also the more intrinsic fact that, despite its 38 minute run time, Oculus is comprised of only five tracks. Now as you and I both know this isn’t a style of music that places a value on quantity over quality and taken as a whole, these five songs combine to form an album that will transport you through a series of musical twists, turns, peaks and valleys all while paying tribute to the most important aspect of the genre…the almighty riff. For those familiar with Borracho this should come as no surprise, because at their heart, they’ve always been a band that demands the undivided attention of their listeners by way of extended jams that feature a multitude of time signatures and stylistic shifts. And from the very first note to the last fading remnant of reverb and through every nuance of the musical journey in between, such is the case with Oculus.

The album opens to the sound of a fluid bass line from Tim Martin that’s then joined by the heavy kick of Mario Trubiano’s bass drum and a delicate, yet psychedelic guitar lick from Fisher. And for what it’s worth, that’ll be the last time I use the word “delicate” in this review. A ghostly female voiceover hovers in the background adding depth to the buildup and then the hammer drops and the trio unleash the first of what will be many killer riffs to come. Collectively, Borracho grind out a solid, mid-tempo groove for the better part of this first track, entitled “Empty”, but then Fisher makes an abrupt turn into the fast lane and the song becomes an altogether different animal. It’s here that we get our first introduction to the guitarist’s vocal register, which you’ll immediately notice to be much cleaner, yet no less commanding than that of Greenburg. Also notable is the surprising range in Fisher’s delivery as he manages to slide up an octave, never quite reaching a scream, but carrying the song’s newfound pace through to its conclusion with an aggressive authority. “Pick up the pieces, try to move ahead…I won’t find my peace, ‘til he’s filled with lead”.

“Know the Score” throws a similar curveball at its start, with Fisher subtly (I told you I wouldn’t say delicate anymore) plucking at his Flying V before the rhythm section joins in and the three are off and running again. Less instrumental than its predecessor, this one will have you grooving to its serpentine rhythm and singing along as the vocalist advises “so light another cigarette…leave a message at the door.” The highlight is the surprising addition of an organ during the song’s bridge, which leads into a bouncing jam session chock full of fuzz and fury. At this point, Borracho are dialed in and assuming you have a pulse, you will be too. The song eventually comes full circle, back to the original rhythm that captivated you in the first place, and by the time it concludes you’ll be left with a sense of compulsive anticipation for what’s yet to come.

By design, the final three tracks flow together as one epic, stoner rock suite, beginning with “Stockpile”, which at nearly eleven minutes, is the album’s lengthiest song. This one rides out a patient pulse of propulsive rhythm laid down by Trubiano and Martin, who combine to unleash a combination of thunderous percussion, deafening crash and the lowest of low end harmonic foundations. But that’s not to say that Fisher’s guitar takes a backseat at any point on the album and in fact, he showcases his playing here with a considerably impromptu and altogether rad solo. Then in true Borracho style, the song shifts gears, becoming another upbeat romp through riff-infested waters before devolving into the haze and confusion of “Eye” (which oh by the way, happens to be the meaning of the word Oculus). Serving as a bridge between “Stockpile” and album closer “I’ve Come for It All,” this one melds static, feedback and ample psychedelic voice effects before the basis of the final song emerges from the chaos.

And oh what a finale it turns out to be. Deftly combining all of the elements that make Borracho what they are…that would be tradesmen in ultra-heavy riffs, rhythms and hooks, in case you haven’t been paying attention…the song opens with a steady build into another solid groove as Fisher croons…”darkness surrounds me, like a long lost friend…there’s no justice, only revenge.” Of course another shift in tempo is always right around the corner and that’s true here as well, when after a series of stop/starts, the band slows it way down…”you better run, you better hide…I’m coming for you.” And then the album concludes amidst the frenetic pandemonium of another monstrous solo from Fisher before the entire ensemble ultimately fades into nothing.

So there you have our take on the latest from Borracho. Now it’s your turn to take a glimpse inside of Oculus and you can’t do that anywhere else but right here at Heavy Planet. Go ahead…hit play and listen to the beginning of a new era for the band. Listen as they cement their status as a bona fide power-trio, all the while maintaining their commanding grasp on the power of the riff. Listen as they prove the timeless old cliché that less can in fact be so much more.-Toby Cole

We hope you enjoy Oculus as much as we do. Be sure to pick up the album when it's released next Thursday and if you're on the East Coast, you don't want to miss Borracho's upcoming tour dates with the mighty Lo-Pan (click the band's Facebook link below for dates). Finally a big thanks to Mario, Steve and Tim of Borracho for giving Heavy Planet the opportunity to showcase their kick ass new tunes.