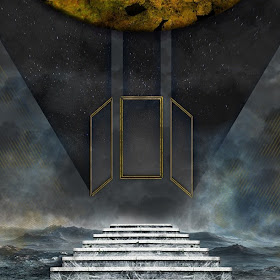 Progressive Rock has become a very confusing genre of music these days. The idea of being “progressive”, is to be ambitious, experimental, usually composed by the musicians of the musically elite. Lightsystem fits that description. This is ultra modern, heavy prog rock. The influences of bands of the 1970’s such as King Crimson or Rush are there, but this is further down the road in the evolution of the genre. The songs go in extended movements, like classical pieces. The guitars are angelic and airy while the rhythm section plays through a plethora of odd time signatures and patterns. The instrumental jams are as interesting as the songs themselves, of which there are a lot of. The vibe of the album is like a musical score to fit a science fiction road movie. It’s apocalyptic, chaotic at times, but always composed.

Lightsystem hails from Los Angeles, California. I haven’t heard a band this impressive from L.A. in a long time. Actually, I haven’t heard a band this good from anywhere. They are ‘overachievers’ in their musicianship as well as their songwriting capabilities. Lost Language opens with a track called- “Glossolalia”. At first, there are chiming guitars and repetitive motifs similar to the Daydream Nation days of the 90’s. Bands like Sonic Youth and Polvo come to mind. It blends into a futuristic ambient backdrop setting for the mood of the album when vocalist Danny Byrne comes in. “Plurals” is a ferocious hard rocker to kick off the album, entering unknown territory with wild guitar arpeggios over  tribal drum grooves, rhythmic beats Jimmy Chamberlain would play. Notable tracks are the instrumental "Untold" which is predominantly synth driven with different sounds of feedback and noise coming in and out. “Mirrors” is outer-spacey, droning in luscious minor scale riffs. The rhythm section is minimalistic, very interesting in the way they use the ‘less is more’ theory, especially after presenting their musical prowess for most of the record. They make minimal sound maximal. I like how the rhythm section plays as much an important role as the lead vocal melodies. Byrne’s vocals are softer than the typical heavy prog singer, making them unique and different from the screamers, whether a band like Soundgarden or Dream Theatre in comparison. His voice is closer to Roger Waters or the British psyche folk singers of the 1970’s (e.g. Tim Buckley, Michael Chapman). But it’s new, a personality unlike any of the singers of today. I love the mix of atmospheric movements and high energy rock songs, which seems to be their thing when listening from start to finish.

I would purchase this album if you’re into musicians‘ music, or experimental psychedelia, or modern progressive rock, as they suit either category quite well. Art rock, or landscape architectural rock, whatever you call it, it’s intense, intelligent and emotionally moving. They clearly have a vision of their own, placing them apart from the 'new prog' you hear about today, The Mars Volta or Coheed and Cambria. Lightsystem is paving their own way and who knows, might inspire a significant change in the genre to move even more forward theoretically and instrumentally. Years from now, I wouldn’t be surprised if they were conducting an orchestra to go along with this music.