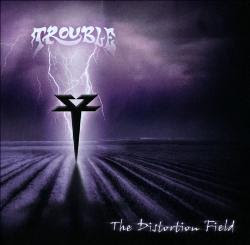 The last couple months have been pretty good for fans of Doom metal. The mighty Sabbath released an excellent comeback album, Cathedral offered up their brilliant swansong, and now Trouble have put out their first album in four years.

A lot has changed since the band's last studio release, 2007's Simple Mind Condition. Original vocalist Eric Wagner is out, again, and new vocalist, Kyle Thomas of Exhorder, is in. For purists this is sacrilege, but for some folks (I know a few), it is a blessing. Wagner's vocal stylings take some time to get used to, and in Thomas Trouble has found a powerful vocalist minus the quirks of Wagner. Both vocalists are great, but the Thomas approach is more accessible.

And the riffs? They speak for themselves. The album is full of heavy grooves and chiseled leads, just what you'd expect from these legends. Solos abound as well, with each tracking boasting an impressive highlight of the guitar skills of Rick Wartell and Bruce Franklin. There are some surprises on this album, Have I Told You is a grungy ballad that might alienate Doom fans who refuse to acknowledge Changes as a Sabbath tune, but including a song like this on the album shows the band is willing to take chances, not content to keep the wheel they invented spinning in the same direction. But, lest you fear that Trouble have branched out too far beyond the genre they nurtured, just listen to the video included below. They can still rock heavy.

The band sounds reinvigorated on this album, and fans of traditional Doom will rejoice, but not for too long, 'cause they're Doom fans.