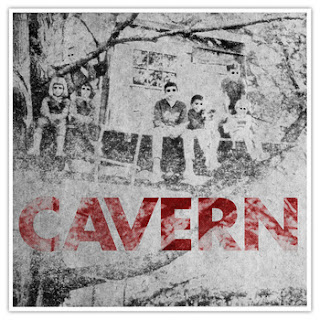 Can you recall the sound of authenticity? For example, the first time you listened to a cassette recording of an early thrash metal band. That raw, very real life sensation that overcame you? Or, for those more contemporary listeners, the initial feeling induced by the grimey sludge growing in Georgia in the early 2000's. That strange progressive combination of swampy grooves and violent thrashing? Well, if you can't then today is going to be a good day for you, because you get another chance to relive that rare moment. This is were we find the beauty of music and its ever evolving, progressing nature which the sonic being cycles, and finally what keeps us coming back for more. What we have here is a Maryland based trio that have hybridized punk, sludge and thrash metal. The band call themselves Cavern and have released their self-titled debut record on February 26th, via Grimoire Records. The opening thunder of the bass and drums on Far Beyond Fields and Evergreens will leave your senses unprepared from the RIFF lashing you are about to endure. Yes, Cavern's RIFFING here is just plain vulgar. If this doesn't remind you of that 1980's thrash vitality, you may very well be hopeless. But then, if you're hopeless this may be the record for you. Now that Cavern has dragged you through their coarse and gritty dirt and your skin is a little tougher, you are weathered and prepared for the storm, and believe me these tracks truly storm the senses. The record is full of relentless RIFFING, a mix of witty percussion and ravaging drum lines, and a three-fold vocal attack. The vocal approach of Cavern is a characteristic worth praising. By employing all three voices, either at the same time or separate times, the songs have an energized and original sound. I really enjoy the muted and buried sound of the vocals in the production, as if the voice is shouting for life through the walls of a sealed room a few doors down. There's a lot to experience here on Cavern's self-titled debut. So, don't be surprised if this one stands the test of time and rears its ugly head come the closing of 2013.

**CDs are available for a limited time at Grimoire Records bandcamp page.** 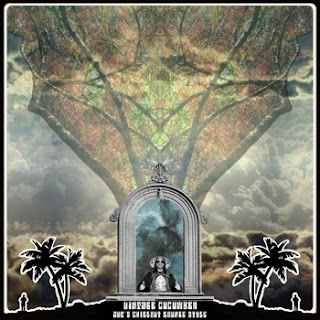 Guten Morgen... or Good Morning. I think it's time to change the pace here at the Double Dose. So, lets cut the head banging, stretch out and forget we have limbs. This second shot is a sole-devised sonic experiment full of fuzzy and warm psychedelia sure enough to leave you levitating. Our maestro and master of ceremonies is Johannes Schulz, the lone mind that conveys the Vintage Cucumber cosmic orchestra. This one man extravaganza has released a handful of albums within the past year, but today we are going to focus on one particular release entitled Jup's Chillout Lounge Style. So remember, this half of the 'Dose is for quiet and peaceful reflection. Let's lose track of time. Jup's... begins with a with a repetitive female spoken line wishing us all a Good Morning in German. The track flows into an elegantly strummed Eastern sounding instrumental, similar to a sitar, while a crash of a gong is buried deep in the back of the mix. This sounds as though it would cause chaos, but in actuality the depth that the sound is buried makes for a comforting heart-beat. If you're looking for a good way to zone out, Guten Morgen is the ideal way to start. The albums sways in and out of a this shoegaze style of drone and psychedelia for approximately fifty minutes. Here and there you will find snippets of vocal passages or laughter, but for the most part Vintage Cucumber's music will obscure you in a warm haze. Sound like a trip you're interested in taking? Great! Just head over to the Vintage Cucumber bandcamp page for Jup's Chillout Lounge Style along with a plethora of other releases.